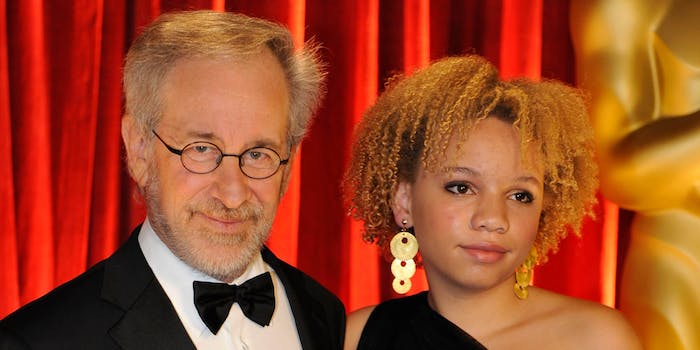 Steven Spielberg’s daughter is launching a career in adult entertainment

Steven Spielberg’s daughter Mikaela is launching her career in the world of adult entertainment.

The 23-year-old revealed her aspirations in a Feb. 19 interview with the Sun. She informed the publication that once she acquires her sex worker license in Tennessee, she hopes to begin working as a dancer at a strip club. She said she’s seeking financial freedom from her famous parents and building up an online following through which she can launch a wider career.

“It was actually really nice and refreshing to have people saying cool things,” she said. “Because people can often say really upsetting things about a Black woman’s body sometimes.”

Mikaela Spielberg, who goes by Sugar Star in her adult videos, announced her career move via social media in early February and called out haters before they could strike.

“I just launched my self produced adult entertainment career. Safe, sane, consensual is the goal y’all,” she wrote. “My body, my life, my income, my choice. I owe not a single person my autonomy or virtue just because of a name.”

Spielberg also told the Sun that throughout her childhood, she was “groomed and abused by predators.” She said none of the sexual abuse she suffered came at the hands of family members or friends, but it has led to lifelong mental health issues.

“I’m very open about my borderline personality disorder both publicly, with friends and online—because we’re portrayed as manipulative monsters a lot,” she said. “You have movies like Gone Girl, which kind of portray us as cold, unfeeling, ‘in-it-for-the money’ monsters.”

Steven Spielberg and his wife Kate Capshaw only recently found out about their daughter’s burgeoning career. When she informed them of her goals over the weekend, she said they were “intrigued” but not upset, according to the Sun.

“I actually think that once they see how far I’ve come from the bottom I was at a year and a half ago, they’re going to look at this and go, ‘Wow, we actually raised are (sic) really self-assured young lady,'” Mikaela Spielberg said.

Read the full interview at the Sun.