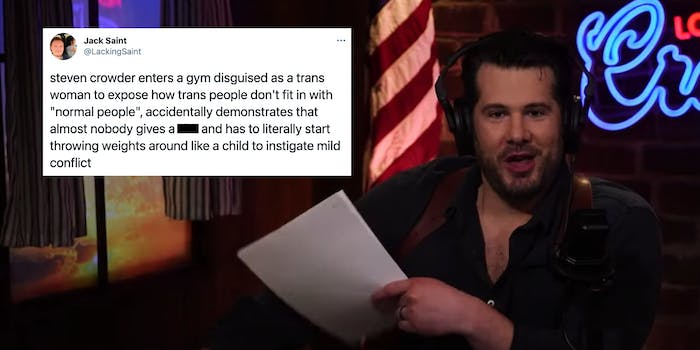 A 5-year-old video is back in the spotlight.

Old images of conservative YouTuber Steven Crowder posing as a transgender woman are stirring debate after resurfacing online this week.

In a tweet on Monday, Twitter user Jack Saint shared images from a video in which Crowder seemingly attempted to get himself kicked out of a gym while presenting himself as transgender.

Saint notes that despite Crowder’s best efforts to cause a scene, “almost nobody gives a shit” about his presence. Crowder ultimately resorts to slamming his weights into the ground to get attention from the gym’s staff.

The tweet of the incident has so far received more than 3,000 shares, with many users criticizing the conservative’s actions. “Crowder is a weird little online goblin desperate to be a colonel in the fucking culture war,” @_Rewhan said.

While many appeared to believe that the images were recent, the video they were taken from was actually published in 2015. Crowder produced the video at the time after Planet Fitness sided with a transgender woman in a dispute over the company’s locker room policy.

The conservative responded to the renewed backlash on Twitter this week by highlighting the video’s original upload date. “Outrage over a 5yr old video. Cutting edge,” Crowder tweeted. “Do the Ice Bucket Challenge next!”

But even users who were aware of the video’s age couldn’t help but revisit the glaring issues with Crowder’s entire premise—mainly nobody in the video had a problem with him until he began breaking the gym’s rules.

In one part of the video, Crowder can be seen purposely setting off the gym’s “lunk alarm,” an audible siren that sounds when gymgoers drop their weights too loudly.

At the end of the video, Crowder is not only kicked out of the gym but banned from Planet Fitness.

After attempting to enter another location, a gym employee informs Crowder that they are aware of him and his intentions.

The original YouTube video, which has more than 2 million views, has also been inundated by criticism.