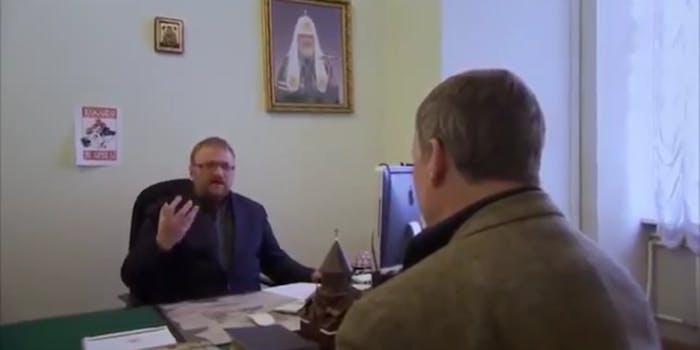 Fry makes sure to call him out on his backwards reasoning at every turn.

British actor and writer Stephen Fry just debuted a new BBC show titled Out There, in which he travels the globe and explores what it means to be gay in different cultures. In a recent segment, he interviewed Vitaly Milonov, the St. Petersburg city council member who proposed a law that would criminalize gay “propaganda” in Russia earlier this year.

The legislation, signed into law last June by President Vladmir Putin, restricts the rights of Russian LGBT citizens and could even be used to detain gay tourists in Russia during the 2014 Winter Olympics in Sochi. Milonov’s statements to Fry make you wonder how he ever reached a position of legislative power.

His concern, he says, is that kindergarten-aged children are already spreading a pro-homosexual agenda in the classroom. Homosexuality, he says, is a genetic defect, and most gay people are “lying about their problems.” Fry makes sure to call him out every chance he gets.

In August, Fry wrote an open letter to British Prime Minister David Cameron, asking him to boycott the Sochi Olympics.