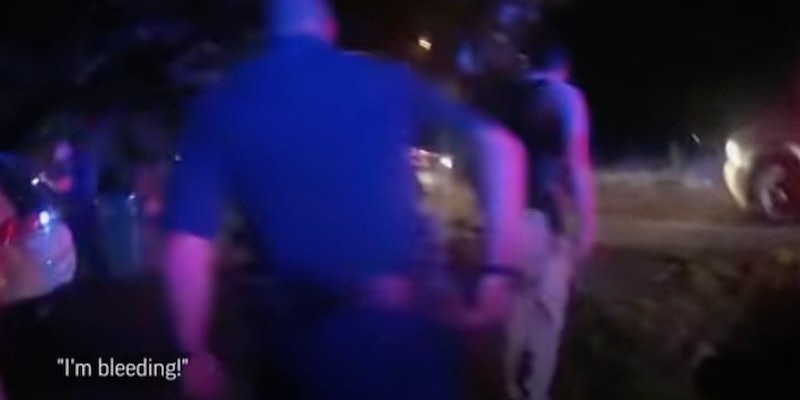 Aaron Larry Bowman was left with a broken jaw, broken ribs, broken wrist, and a head-wound that had to be stapled shut.

In a video released by the Associated Press, Louisiana state trooper Jacob Brown is seen hitting Aaron Larry Bowman, a Black man who had been stopped for a traffic violation, in the head with a flashlight.

The video was taken in May 2019, and is bodycam footage.

The video begins inside a squad car, and when Bowman is first captured on video, he is already face down on the ground with officers holding him down. As Brown beats Bowman with the flashlight, Bowman can be heard saying “I’m not resisting.”

“I ain’t messing with you,” says Brown. “Give me your fucking hands.” The footage then shows officers standing at the scene.

“I’m bleeding,” Bowman says after being hit. “They hit me in the head with a flashlight.”

AP reported that Bowman had a broken jaw, broken ribs, broken wrist, and a head-wound that had to be stapled shut. Brown said that the use of force was “pain compliance” to ensure that Bowman was successfully handcuffed.

Investigators disagreed and deemed Brown’s actions unreasonable and unnecessary, but the Louisiana State Police didn’t investigate Bowman’s case for 536 days after it transpired.

Brown currently faces “state charges of second-degree battery and malfeasance in Bowman’s beating,” and Bowman faces charges for “battery of a police officer, resisting an officer” and his original traffic violation, according to the AP.

Federal charges have also been brought against Brown, who has been involved in 23 use-of-force incidents. The Louisiana State Troopers are also under investigation for the death of Ronald Greene, a Black man who died after being beaten by police only three weeks before Bowman was stopped, according to the New York Times.

In an interview with the AP, Bowman shared that he thought he was going to die the night he was beaten by police. Watching the bodycam footage “was like reliving it all over again.”

“I broke down all over again,” he said.

The Louisiana State Trooper’s Office has not yet responded to the Daily Dot’s request for comment via email.