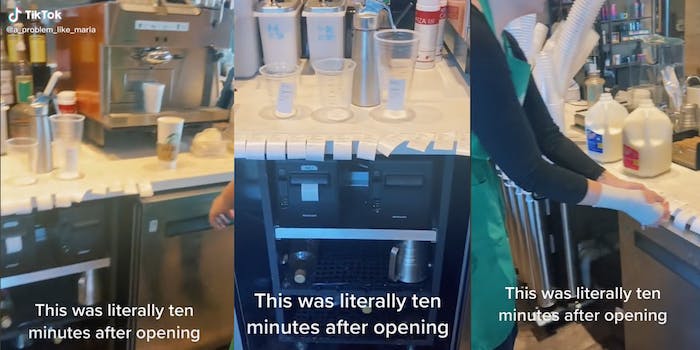 ‘Do not work at Starbucks’: People feel sorry for Starbucks workers slammed with overwhelming number of orders only 10 minutes after opening

'This is why we have a spot called the 'crying corner' at my store.'

A TikTok video of Starbucks employees trying to keep up with an overwhelming number of orders just 10 minutes after opening has garnered nearly 100,000 views on the platform.

“Y’all I had to pull all the stickers out because our other sticker machine was down and we had to get cafe and mobiles!” the video’s creator commented.

One TikToker who claimed that they worked at the coffee chain said they received a similar number of orders—from one customer alone. The customer, they said, ordered 45 beverages and was apparently upset that the order wasn’t ready quick enough.

Another pointed to the clip as the reason why one should “not work at Starbucks.”

Another claimed that situations like this were enough to make them quit.

“This got so old it’s why I had to tell the siren goodbye,” @w.jsmith wrote.

The scenario seen in the TikTok video is apparently not an out-of-the-ordinary experience for Starbucks employees.

“I’m gonna show this video to anyone who says I’m not allowed to complain about my job,” @notsosupersami wrote.

This particular location is also understaffed, according to the poster.

It’s commonplace enough that there is a “crying corner” at one location, according to another commenter.

Some users wrote that they felt bad for Starbucks employees—even before watching the video.

The Daily Dot has reached out to the poster and Starbucks regarding the video.