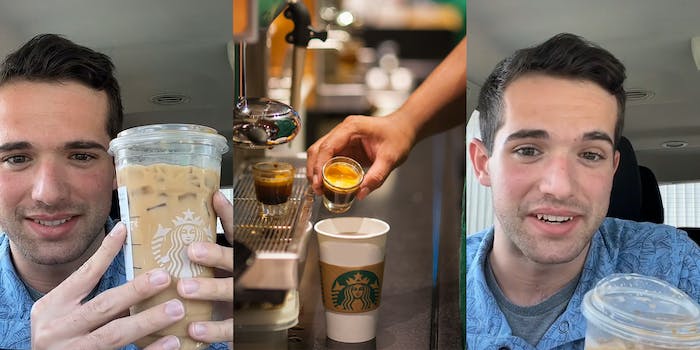 Starbucks customer says he was ‘bullied’ by barista after asking for 5 shots, sparking debate

'Ain’t nothing wrong with 5 shots.'

Update 1:57pm CT, July 12: The TikToker clarified to the Daily Dot his video was intended to be a joke and that he doesn’t actually think he was actually bullied by the barista.

Original story: A man on TikTok says a Starbucks barista “bullied” him for requesting a drink with five shots of espresso in it.

The TikToker, Ryan (@rmatthews_98), says in a recent video that he was “exhausted” at the time and needed the heavily caffeinated drink. As of Thursday, the video received about 60,000 views.

“Please don’t come for me about my caffeine intake…” he wrote in the video’s caption.

Ryan says he went to Starbucks for a “depresso espresso,” his “sad boy drink” that includes five shots.

When he asked for the extra shots, the barista asked to confirm, “You want five shots?” The TikToker told her yes and thought that was the end of that.

“She just kept addressing that there was five shots in my drink,” Ryan says in the video. “So when I went up there [to get my order], she goes ‘here’s your drink with five shots,’ and I said thank you.”

Ryan explains that he already knows there are five shots, as does the barista, but that he felt it was unnecessary to announce it.

“Just let it be. Obviously, I have a problem, but I would appreciate it if you would ignore that just like I did,” Ryan says.

Most commenters seemed to side with Ryan, saying he should be able to get his five shots without being bullied.

“Respectfully sir, you are gorgeous and if you want 5 shots! You get 5 damn shots!” one viewer commented on the video.

“But did you know it has 5 shots,” another viewer joked.

Several viewers chimed in saying five shots isn’t even that many and that some Starbucks drinks already come with almost that many.

“Is it the Brown sugar shaken espresso with 5 shots,” another user asked.

One viewer commented, “As a former half barista (Target) we don’t claim her haha also 5 shots is like normal babe.”

A second viewer said, “Not me a barista saying ‘only 5?'”

The Daily Dot reached out to user @rmatthews_98 via TikTok comment and to Starbucks via email.