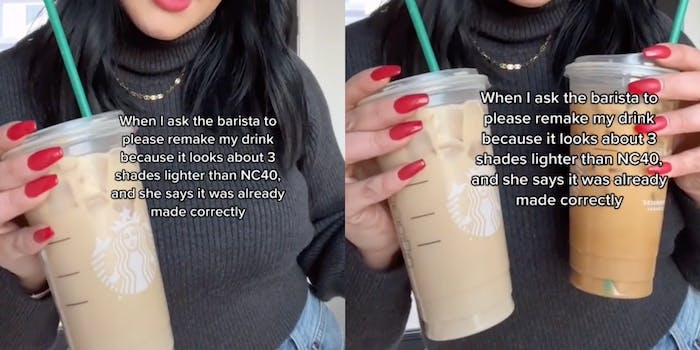 'Or imaging paying extra for changes like coconut milk bc you can't do dairy...'

A TikTok creator is being called out by some of her viewers for making a video in which she criticizes a Starbucks employee for making a drink that doesn’t match a MAC foundation shade.

“When I ask the barista to please remake my drink because it looks about three shades lighter than NC40, and she says it was already made correctly,” a text overlay on the video reads.

The TikToker shows her first beverage, then pulls out a second drink that is a slightly deeper shade of brown. The audio accompanying the video, to which she lip-syncs, says, “that was embarrassing, I really hope you’re embarrassed.”

Some users called the video “condescending,” and said it was unnecessary when all she had to do was ask for the drink to be remade.

When another user implied that they thought it was a bit ridiculous that she was having a service worker remake a drink because it wasn’t the right color, she clapped back, saying that it was an expensive drink and she expected it to be made correctly.

“Or imaging paying extra for changes like coconut milk bc you can’t do dairy and not only they get the order wrong, you get charged for it,” she wrote. “Repeatedly.”

Other commenters agreed with her, saying that if she paid for a drink to be made a specific way, it should be made that specific way and produce the same results every time.

“Hi I’m a barista and espresso drinks should always turn out the same color,” one commenter wrote. “If the espresso messed up—not your fault. We should remake it for you.”

When another commenter agreed that something was up with the drink, and it looked like the espresso had been incorrectly prepared, they asked the poster to kindly let someone know. The poster said she did, but was frustrated with responses she consistently received over her drinks.

“I do let them know kindly,” she wrote. “It’s just frustrating when they tell me I’m wrong or act like I’m being too picky. Moooost times they remake it no problem.”

The Daily Dot has reached out to @conniecantu via Instagram DM.