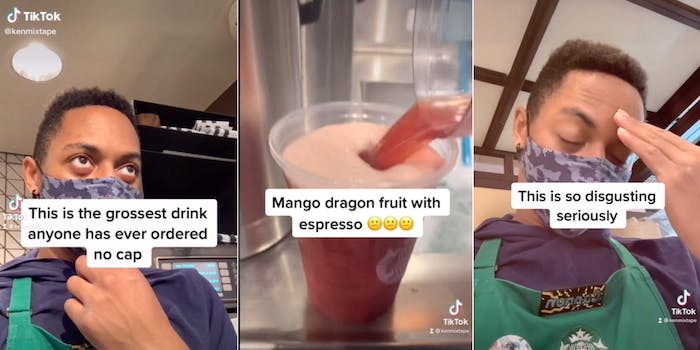 'Just bc smth is foreign to you doesn’t mean it’s automatically bad!'

A TikToker, known for working at Starbucks and revealing behind-the-scenes antics, shared the “grossest drink anyone has ever ordered” on Sunday, and the video already has 1.4 million views.

Previously, the barista shared one of the “strangest” drinks they’ve ever made, and although the TikTok got 4.9 million views, viewers were not fully impressed by the reveal of semi-average ingredients mixed together.

According to the caption on this latest weird-order video, TikTok took down the original due to “harassment and bullying” so the user, @kenmixtape, reposted an edited version.

It starts out “normal” as a lemonade with mango and dragonfruit. The barista adds ice, and all seems to be going well. Then, out of nowhere, espresso enters the picture.

“This is so disgusting seriously,” the overlay reads while the barista shakes their head and then shakes the beverage.

“Mango dragonfruit with espresso 😕😕😕,” the final product is dubbed.

Many were truly disturbed by the concoction.

“I was like the mango dragonfruit is good tho??? Then the expresso 😳,” commented @avatar_bela.

“…..it was fine until the espresso was added like why,” agreed @jewel_spark2011.

Others quickly pointed out that versions of this drink are popular in other parts of the world and isn’t considered strange by many.

“Here in Portugal there’s a drink that is freshly made lemonade with an expresso mixed in ice so im not sure im fully weirded out lmao,” said @alexandrascorvo.

“Lemonade and cold brew (maxagran) is a common drink in some parts of the world so this doesn’t sound that strange lol,” wrote @sunny_zkhan. “Just bc smth is foreign to you doesn’t mean it’s automatically bad!!! You should at least try it before you judge so harshly.”

According to Wikipedia, mazagran is a sweetened iced coffee drink with citrus (mainly lemon) and sometimes mint and rum.

Many fellow barista TikTokers also took the opportunity to share weird or difficult orders they’ve received on the job.

Whatever you order, just tip your barista.