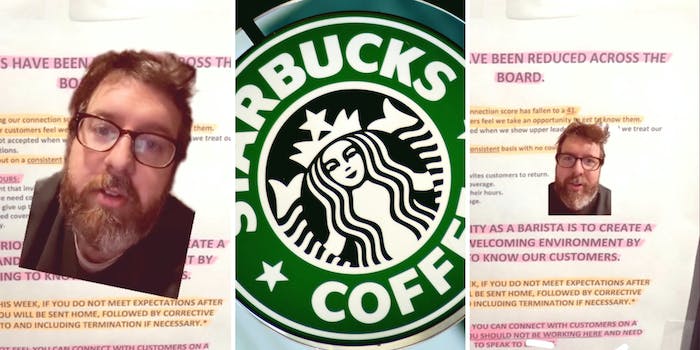 ‘I don’t need your workers to get to know me’: TikToker blasts Starbucks program where baristas spark personal convos, reveals email from manager cutting hours for low ‘connection’ scores

In a TikTok posted Dec. 26 by @benwithabee, the TikToker shows a document that was apparently meant for internal circulation within a Starbucks that reprimands employees for not making customers feel like employees want to “get to know them.” @benwithabee’s account is known for covering employee and laborer rights.

“Only 41% of our customers feel we take an opportunity to get to know them,” the document states. “Several partners call out on a consistent basis with no coverage.” Both are part of a list of reasons that employees’ hours were “reduced across the board” at the Starbucks in question.

“IF YOU DO NOT FEEL YOU CAN CONNECT WITH CUSTOMERS ON A CONSISTENT BASIS, YOU SHOULD NOT BE WORKING HERE,” the document reads. It was first posted to Reddit, according to @benwithabee.

In response to the document, @benwithabee said that as a Starbucks customer, he doesn’t want his barista to try to get to know him.

“This is a PSA to Starbucks and whoever runs the store. I don’t need people to get to know me at your store,” he said. “My relationship with you is very transactional.”

It’s unclear how old the alleged document is or what locale it pertains to.

With regard to a part about there not being enough coverage for shifts, the TikToker said that in his experience as a manager, managers should be covering shifts that no one else to take on.

Many commenters on @benwithabee’s video agreed with his take: Customers don’t need Starbucks baristas to get to know them.

“Every time a Starbucks barista has tried to “get to know me” it feels like they’re being held at gunpoint for the entire interaction,” commented @josephbradley50.

“Omg [please] don’t try and get to know me,” wrote @boobiscuit. “My anxiety is already bad enough.”

Others talked about a “disconnect” between baristas and management.

“Thank you for shining light on this,” wrote @courtneybrockingt, who identified themselves as a former Starbucks partner.

“They want you to keep [Point Of Service] times under 30 seconds. But want you to have a high connection,” commented @phoenixfrost94. @benwithabee responded, saying that stipulation “just doesn’t make sense.”

“I love genuine small talk, but the stuff you try to force out in a 30 second interaction just isn’t the move,” @benwithabee commented.

Starbucks is regularly praised for its “innovative” approach to customer service, including its community engagement and branded products. This apparently includes a corporate mandate to track the personal connection between labor and customer via “connection scores.”

According to a Reddit post from four years ago, these Starbucks scores come from surveys sent to rewards members. One user lamented that their answer negatively impacted their barista: “OMG, as a customer I feel awful, I’ve never marked that 7 out of 7, but that has nothing to do with my customer satisfaction! I do mobile ordering 99% of the time, I don’t WANT the baristas stopping me to ask about my life while running in and out.”

The Daily Dot has reached out to the TikToker via TikTok comment, and Starbucks via email.