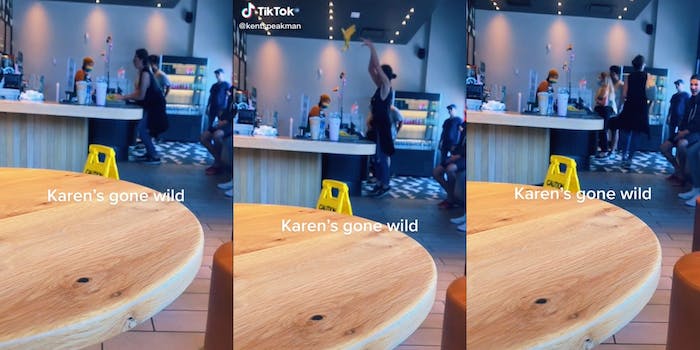 'I don’t know how people do that without getting embarrassed.'

The video, posted by Kent Speakman, has reached 210,000 views and received over 16,000 likes on TikTok. Speakman captioned the video “Karen’s gone wild.”

The footage shows a woman standing at the counter inside what appears to be a Starbucks, lifting a bunch of bananas, and tossing them over the counter. She then stalks out of the store.

Another customer can be seen in the background laughing at the Karen’s actions, but some viewers on TikTok didn’t find it so funny.

“I don’t know how people do that without getting embarrassed,” one user commented. Another said, “I will never understand why people don’t get in these people’s faces. People do this because no one stands up to them.”

Others had to throw out their best banana puns.

“Bannaned for life,” one cracked. Another said, “Karen has literally gone BANANAS.”

Others found the situation much more serious and felt concerned for the cashier behind the counter.

“Is the cashier okay tho???” one person asked. Someone else commented, “Poor employee.”

The cashier could be seen putting a hand over their face in disbelief after the Karen walked out. It’s unclear what prompted the incident, but the Daily Dot reached out to Speakman for comment.