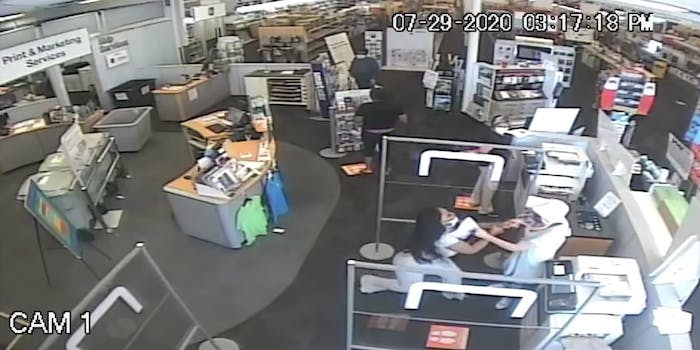 Video: ‘Staples Karen’ pushes woman with cane after being told to wear mask

The woman suffered a broken leg.

A dispute over a face mask at a Staples in New Jersey this week led one woman to have her leg broken by an angry customer.

Surveillance video released by police shows a 54-year-old woman, identified as Margot Kagan, being thrown to the ground after an altercation in the store.

Kagan told officers that she was using a fax machine when another woman approached and pulled down her mask. Kagan says the woman, who is already being referred to as Karen online, became outraged when asked to put her mask back on. In the video, the woman is wearing the mask incorrectly, not covering her nose.

Police say Kagan told them that she had undergone a liver transplant just four months prior and had been walking with a cane ever since.

“The suspect became angry and yelled at the victim, who picked up her walking cane and pointed it directly at the suspect, coming within inches of the suspect’s chest,” said Hackensack Police Department Capt. Darrin DeWitt.

Kagan is then grabbed by the woman before being tossed to the floor, breaking her leg in the process.

The woman left the scene shortly after, while Kagan was taken to a nearby hospital and treated for a fractured left tibia.

Police are still trying to confirm the identity of the attacker.

The incident is just one of many in which Karens have been witnessed causing a scene in public over trivial issues.