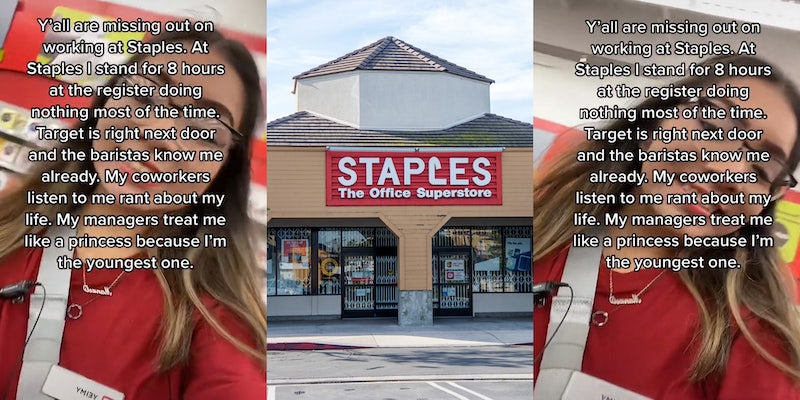 ‘My managers treat me like a princess’: TikToker encourages viewers to work at Staples, prompts discussion about working for the office supply store

'Healthy work environment I thought those were a myth.'

A young woman’s video sharing details about working at office supply retailer Staples has drawn more than 742,000 views on TikTok, where viewers are chiming in with reasons they did or did not like working there.

In the six-second video, Yeimy (@yeimytinoco) walks around the store. The text overlay explains why she enjoys working there.

“Y’all are missing out on working at Staples,” the text overlay reads. “At Staples I stand for eight hours at the register doing nothing most of the time. Target is right next door and the baristas know me already. My coworkers listen to me rant about my life. My managers treat me like a princess because I’m the youngest one.”

Viewers shared their own experiences working for Staples, which ran the gamut of good and bad.

Some had some fairly negative experiences working there, ranging from issues with management to receiving lower pay than they would have liked.

“I worked at staples for two years,” one commenter wrote. “It was such an easy job but my managers were the worst.”

“Naw I worked at Staples for months and it was miserable,” another commenter wrote. “The General Manager showed up drunk everyday and continued to drink during her shift.”

“Clearly you’ve never had to deal with store visits or even a minor inconvenience to your managers because girl I work here and trust me we can ALL do better,” a viewer wrote.

Others had generally positive experiences, and encouraged others to go work at the store.

“Dude and I love my print and marketing department best impulse I ever applied to!” one viewer said. “Such a healthy environment at my store.”

“I worked at staples for a almost a year and I loved it!” another commenter said. “Easy job even when you have truck. Only reason I left is because they wouldn’t give me full time.”

“One of my current coworkers worked at our Staples for YEARS before they shut it down and he talks about how much he loved it,” another wrote.

The Daily Dot has reached out to @yeimytinoco via Instagram direct message regarding the video, as well as Staples via email.