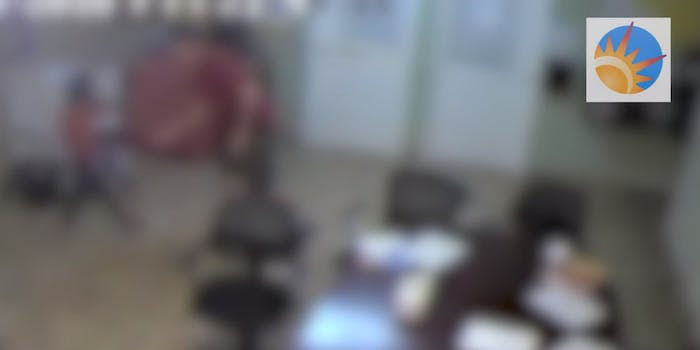 The shelter has since closed.

A newly released video shows staffers beating and forcefully dragging children across the floor at an immigrant detention center in Arizona.

In one video, taken at Southwest Key’s Hacienda Del Sol facility in Youngtown and shared by the Arizona Republic, a man is seen dragging a child into the room by his hair, beating him, and cornering him to the other side of the room against another door. The child appears to defend himself, and the man then pushes him away from the door and walks out.

In another video, two staffers are seen, separately, each dragging a child into the room. In both cases, each child appears to be unwilling to go, wherever they’re being taken, through the other door. Also, in both cases, when the child tries to resist being taken and tries to stay behind, the staffer drags them across the floor.

The incident reportedly took place in September. The Hacienda Del Sol facility was closed in October, as part of an agreement with the Arizona Department of Health Services, which required it to close two of its Phoenix shelters and pay a fine. However, it is not clear if the shelter was closed due to this incident.

The video from Hacienda Del Sol comes at a particularly crucial time, following two deaths of migrant children within weeks while in U.S. Customs and Border Patrol (CBP) custody. Both children were from Guatemala and had shown symptoms of illness before they died.