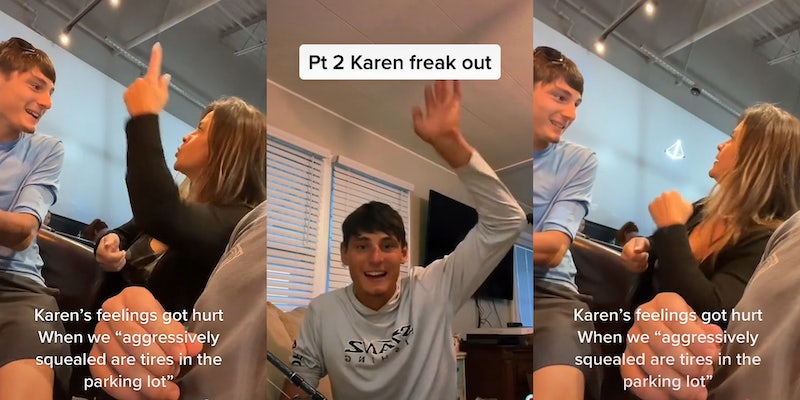 'She’s all in his personal space, but he’s 'aggressive.''

In a viral video with over 1.6 million views, TikToker Michael Boggess (@michaelboggess_) allegedly has an interaction with a “Karen” at a sushi restaurant where she threatened to call the cops.

“Met this ‘Karen,’ make her famous! Her daughter got offended when we did a burnout outside of the restaurant,” the caption read.

@michaelboggess_ Met this karen make her famous! Her daughter got offended when we did a burnout outside of the restaurant #fyp #karen #funny ♬ original sound – Michael Boggess

The viral clip begins with Boggess sitting at the counter in the restaurant with the woman standing close by. She proceeds to yell at him while asking if he was high and threatens to call the police.

“Karen’s feelings got hurt when we ‘aggressively squealed [our] tires in the parking lot,’” the overlay text further explained.

In the comments section, users laughed at the exchange.

“‘Ma’am you can’t call 911 cuz someone spoke sarcastically to you,’” one user commented.

“Imagine calling the cops and saying the tires squeaked lol,” another said.

“It’s always the karen’s saying you’re being so aggressive when they’re all up in your face threatening to call the cops & yelling at u,” a third user commented.

In a part two video, Boggess shared the back story to the “Karen” interaction to add some clarity. He says that he was meeting a friend for sushi and when they both arrived at the restaurant, they were messing around and doing burnouts in the parking lot.

“Karen’s daughter was just pulling in a parking spot. She got out of her car and flipped us off, and told us to suck a d**k,” Boggess says.

He says he began laughing in his truck and responded by saying, “no, you,” to the daughter. After waiting for the situation “to cool down” a bit, Boggess says he walked in and the girl waved at him.

“We went and sat up at the bar. Said hi to the owner,” he says. “We look behind us and they’re staring at us, pointing, and we just start dying laughing.”

That’s when her mother, or ‘Karen,’ walked up and did “her little spiel,” Boggess continues. The owner allegedly reassured Boggess and his friend that they were OK, and asked if they wanted the mother-daughter duo to be removed. Boggess says he declined, stating there was “no need for that.”

In the comments section, users share their thoughts on the situation.

“So the daughter is just as lovely as her mother,” one user said.

“I know you took the higher road but I really think you should’ve let the owner kick them out. They’re gonna treat other people like this someplace else,” another commented.

“I want to [toilet paper] her house,” a third user said.

The Daily Dot reached out to Boggess via TikTok comment.