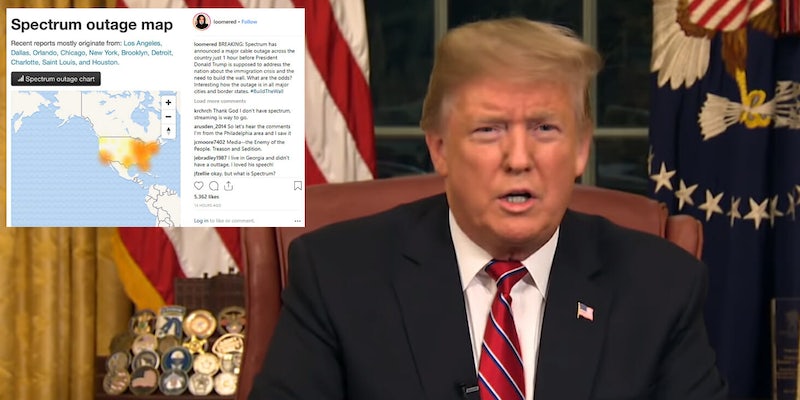 No, Spectrum didn’t shut off its internet to censor Trump’s speech

The company says there were no 'major outages' last night.

“BREAKING: Spectrum has announced a major cable outage across the country just 1 hour before President Donald Trump is supposed to address the nation about the immigration crisis and the need to build the wall,” she wrote on Instagram. “What are the odds? Interesting how the outage is in all major cities and border states. #BuildTheWall.”

The post appears to direct people to a downdetector.com map, which—in part—detects alleged outages using Twitter posts, according to its website. In its disclaimer, DownDetector says it does “not claim that a company is suffering from an outage or any other kind of problem.”

DownDetector has no affiliation with Spectrum or other services.

The post was soon picked up by right-wing website the Gateway Pundit, which led to people suspecting something nefarious was happening with the cable provider.

@Spectrum @NY1 how convenient. A cable outage on the night @realDonaldTrump has a speech. Liberals hate the truth.

Get the FCC involved.

How Convenient: Charter Spectrum has Major Outage Across US before President Trump's Address on Border Security https://t.co/MOzEDljjm2 via @gatewaypundit

When asked about the alleged outages, a spokesperson for Charter Spectrum told the Daily Dot there were no “major outages” last night.