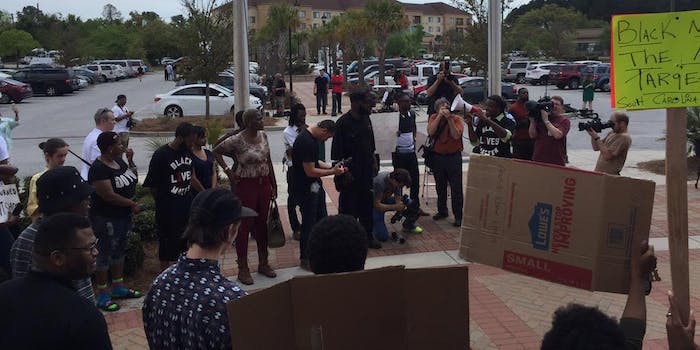 "The world is watching."

Residents of North Charleston, S.C., gathered outside City Hall on Wednesday to express their outrage and anger after a police officer shot and killed an African-American man who was running away from him.

The protests interrupted Mayor R. Keith Summey as he held a press conference about Patrolman 1st Class Michael Slager, who will be charged with murder for killing 50-year-old Walter Scott by shooting him in the back eight times. Slager has been fired and is currently in protective custody.

The killing of Scott, whom Slager pulled over for a broken brake light, leapt into the headlines on Tuesday after the New York Times published a bystander’s video that disproved many of the police department’s claims.

Twitter hosted a steady stream of photos and videos from the protest site on Wednesday. Demonstrators carried signs with now-familiar slogans like “Black Lives Matter” and “The World is Watching.”