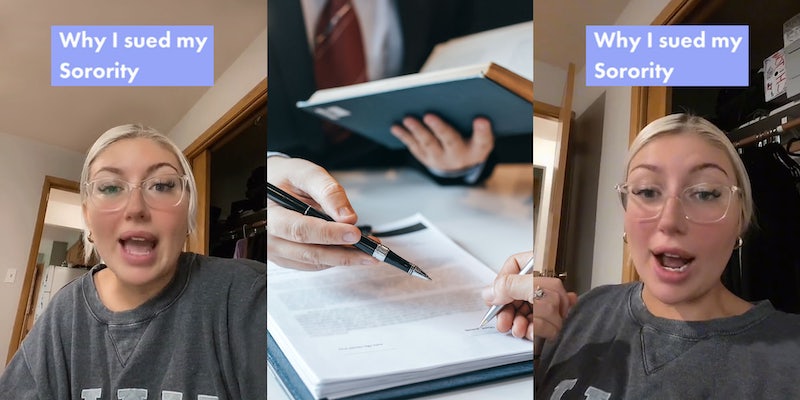 ‘I had to literally hire a f*cking lawyer’: Woman claims her own sorority tried to scam her

'I am now five years post-grad, but I will never f*cking forget what this sorority did to me.'

In a now-viral storytime, a TikToker claims that her sorority attempted to wrongfully charge her $3,000 while studying abroad, prompting her to hire a lawyer to absolve the fine.

In the video posted by TikToker Taylor Limas (@ladyaguilera2.0) on Wednesday, she says that she joined the sorority during her sophomore year of college and signed a half-lease to live at the sorority house before studying abroad her junior year.

“Do not join a sorority. I had to literally hire a fucking lawyer because my sorority tried to fucking scam me,” Limas says in the clip. “I am now five years post-grad, but I will never fucking forget what this sorority did to me.”

In part one of the storytime, Limas explains that during the sorority’s chapter meeting, the new members were told that if they wanted to study abroad, they should sign a half-lease for the sorority house so that they would not pay for the time they were out of the country. Although Limas says she signed the half-lease and constantly communicated with the sorority’s leadership about her study abroad plans, she was hit with a $3,000 fine through the university’s financial department.

“At my university, the sorority is allowed to bill your university bill. What that means is that if I don’t pay my sorority charge, I’m not allowed to sign up for classes,” Limas says. “I would like to make it extremely fucking clear that I went to university solely on scholarships and loans.”

Limas continues that she initially thought the charge was a mistake and emailed the sorority that she signed a half-lease. However, the sorority responded that “You never signed one. Half-leases don’t exist. You owe this money.”

“I now cannot sign up for classes because I cannot come up with $3,000 on the fucking spot,” Limas says. “I’m arguing with the finance department, asking them to explain to me how a fucking extracurricular is stopping me from going to school.”

Limas explains that the university finance department eventually agreed to “put the payment on pause” but told her that she still owed the payment until she reached an agreement with the sorority.

Part one of the storytime reached three million views by May 19, with commenters asking her to continue to storytime and name drop the sorority. Others shared their own sorority billing horror stories.

“My friend transferred to a different school and the sorority tried to sue her $10k for breach of contract,” one user said.

“I dropped out of school and they tried to charge me $3.5k for house dues and I wasn’t even going to school there anymore,” another wrote.

“My sorority wouldn’t let me drop and tried to send me to collections for not paying,” a third added.

@ladyaguilera2.0 I’m not the one nor the 2z #fyp #fypシ ♬ original sound – Taylor Limas

In a second part that has garnered over 479,000 views, Limas continues that she “heard through the grapevine” that the girl that took over her spot in the sorority house was bullied and dropped the sorority, leaving Limas’ previous room vacant again.

“The sorority, because it’s a business, didn’t want to be out that $6,000 or $7,000, so they decided to stick that bill on me,” Limas claims. “I wasn’t friends with anyone. I was the outsider. And I think they thought I came from money.”

After returning to her university’s campus for her senior year, Limas says she was hit with another bill. While she says she attempted to work with the school’s legal team, which represents students, they couldn’t represent her because she was affiliated with the sorority.

“Again, I can’t sign up for classes. And this time, they’re not going to waive the fee,” Limas recalls. “School meant everything to me. I have to keep my GPA up in order to keep my scholarship.”

Limas says she gathered all the evidence she had and emailed the national leadership of her sorority. After her claims were ignored, she says that she decided to hire a lawyer.

@ladyaguilera2.0 If you join after this idk how to help you. #fyp #fypシ ♬ original sound – Taylor Limas

In the final part of the storytime, Limas adds that she found out the girl who was allegedly bullied out of the sorority also hired a lawyer as the sorority was attempting to fine her.

After submitting the “ten-page essay” and evidence to her lawyer, Limas says that her lawyer sent the sorority’s national leadership an email saying that they would not be paying the fees, citing the evidence that Limas was wrongfully charged.

Limas says that she would have been stuck with thousands of dollars in fines if she didn’t have the evidence against her sorority or didn’t go against them.

“Don’t join a sorority. Make your own friends. And honestly, fuck Greek life all around,” Limas concludes.

Several users encouraged Limas to sue the sorority for the lawyer’s fees in the comments.

“Sue them for your lawyer fees. You have all the evidence to prove that from the beginning, you didn’t owe and that they were just pushing it off on you,” one commenter wrote.

“Please tell me you got them to pay for your lawyer and for defamation and pain and suffering. That’s a lot of stress. They basically bullied you,” another said.

“Make them pay your lawyer fees for defamation,” a third encouraged.

The Daily Dot reached out to Limas via TikTok comment.