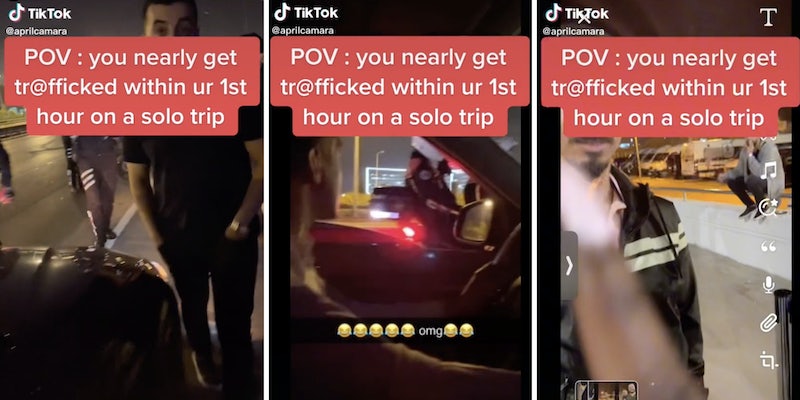 A TikToker shared she was nearly trafficked while solo traveling, sparking debate

'This can happen anywhere.'

A woman says she was “nearly trafficked” on a solo trip to Turkey in a now-viral TikTok. The video sparked debate about solo travel safety for women in the comments.

In the video posted by TikToker April Camara (@aprilcamara) on Monday, she shows Snapchat footage of her riding in a car with a police motorcycle driving beside it with its lights on. The next clip shows her standing outside the vehicle on the road, with police lights flashing in front.

Text overlay on the clip reads, “POV: you nearly get trafficked within ur 1st hour on a solo trip.” The video is captioned, “I was so [drunk] from the flight I didn’t even realize until the police told me.”

The video has over 351,000 views as of Wednesday, with commenters cautioning Camara on traveling alone as a woman in Turkey.

“Girls, I traveled solo in +7 countries and let me tell you. Turkey was dangerous. I’m not even kidding. I went to Istanbul and I was afraid,” one commenter wrote.

“This happened to me in Istanbul lmaoooo,” another said.

“I’m also in turkey and ppl keep telling me its so dangerous,” a third added.

Others disagreed, recalling their own experiences solo traveling in Turkey.

“I went to Antalya turkey on a solo trip like a week ago and had a great experience,” one user said.

“I went to Turkey and felt pretty safe. I’m so sorry this happened to you, but I don’t think Turkey is that dangerous this can happen anywhere,” another wrote.

According to data published by the International Labor Organization in 2017, there are approximately 24.9 million victims of human trafficking in the world. The State Department’s 2021 Trafficking in Persons Report says that of the 276 victims found in Turkey in 2020, “victims in Turkey are primarily from Central and South Asia, Eastern Europe, Azerbaijan, and Syria.” These victims primarily come from vulnerable refugee populations and are not leisure travelers.

The National Consumers League recommends that all travelers educate themselves on trafficking “warning signs” and “register with the local U.S. embassy” when traveling abroad.

The Daily Dot reached out to Camara via TikTok comment.