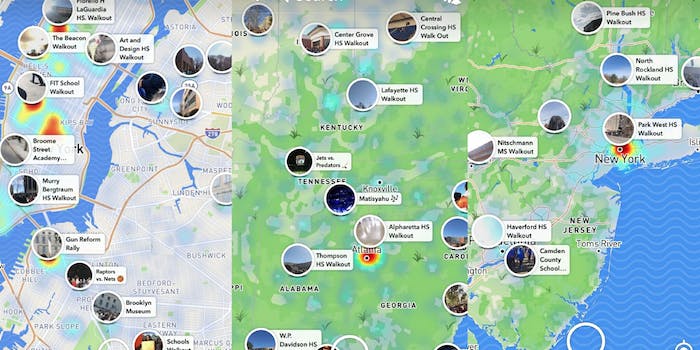 Snapchat offers a sobering view of the National School Walkout

One month after the Parkland shooting that killed 17 high school students and teachers, students across the U.S. are participating in the #Enough: National School Walkout, spending 17 minutes outside in honor of the victims.

Though a majority of the demonstrations for National School Walkout day have ended, viewers can still see these protests through the eyes of middle and high schoolers across the U.S.—on Snapchat.

Thanks to the app’s Snap Map feature, users can see demonstrations everywhere from California and Colorado to the East Coast. The feature collects and centralizes Snapchat photos and videos of events and breaking news, making it easy for users to watch posts shared from the demonstration. The Snap Map also features a National Walkout story sharing the gist of the day’s events.

Of course, some people looking through the Snap Map have already picked up on teens’ creative ways to express their freedom of speech and assembly:

Others have outright made fun of and dismissed them, as if teens aren’t doing enough by literally leading the nation’s movement against gun violence.

And some have expressed pride:

My snapchat search suggestions was full of 30+ different high schools and middle schools hosting school walkout events, I've never been more proud, especially my sister being one of the many bright young people pushing this country forward pic.twitter.com/NfOr6mUs6J

all of the walkout stories on snapchat fill my heart !! our generation will be the change ♥️♥️ #neveragain pic.twitter.com/IRJPR0eYmz

But looking through the map itself feels a bit jarring, and almost surreal. Not only are there high schools participating in this walkout, but middle schools, too. It’s normal to hear chants of “Enough is Enough” at rallies such as this, but when it’s coming from tenor voices—12 year olds, who must already fear the potential rage of a classmate, teacher, or a relative of either—its outright shameful realizing that the rest of the nation, in its inability to act on gun violence, has left it up to our children to get it done.

The posts on Snapchat may only be active for the next 24 hours or so, but the movement itself has shown no sign of stopping. The March For Our Lives anti-gun-violence rally is scheduled in Washington D.C. for March 24, and it will be joined by local demonstrations across the country.