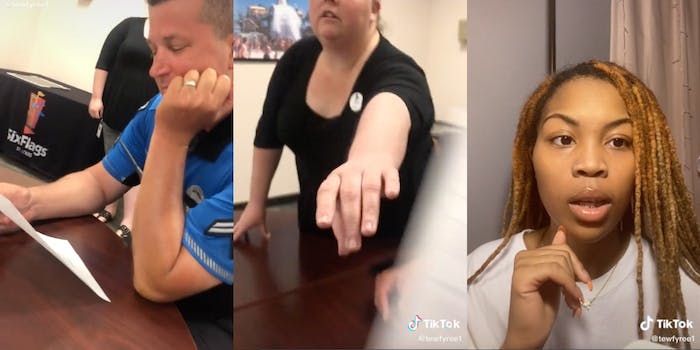 ‘Kiss my a**’: Six Flags culinary worker drags manager after being suspended in viral TikTok

A police officer was also present, appearing speechless at the worker's bold choice of words.

A viral TikTok shows a Six Flags culinary worker dragging a manager in response to being suspended.

@tewfyree1 posted a set of videos detailing a situation at Six Flags St. Louis amusement park. In the inciting video, she’s sitting in an office with an amused police officer reading out a “corrective action” form that suggests her suspension from work. The incident appears to have occurred in 2019.

@tewfyree1 asks the officer to read it aloud, but he’s speechless. As a result, she takes the form back and proceeds to drag the stern-looking white woman in the back of the video. The officer doesn’t put up much of a fight and allows her to read it.

The St. Louis native starts the backstory by saying it was her first job and that she “really don’t care for white people.” She details the racism experienced outside of St. Louis, saying that the city and the rest of the state of Missouri are different for Black people.

On the day of the incident, it was already time for her to clock out. But her attitude about having to sit outside in the rain got her in trouble with Six Flags management.

The videos seem to be out of order on her account, but at some point, she’s upset about being out in the rain in her effort to leave work. Eventually, in the midst of her anger, a security guard approached her. He gets physical with her and snatches her work badge, an action she later believes Six Flags could’ve been sued over.

“Oh, bitch, I’m having flashbacks,” she says. “This grown-ass man, first of all, why you even touching me?” She was 15-years-old at the time.

She eventually gets to the events of the initial video with the police officer, including their desire to suspend her. However, she explains she was already ready to quit Six Flags by then.

“[The officer] was cool as fuck; fuck him because he white, but he was cool,” she states.

She stands up at the end of the video, telling Six Flags St. Louis to “kiss this,” grabbing her behind.

The Daily Dot reached out to @tewfyree1 for comment.