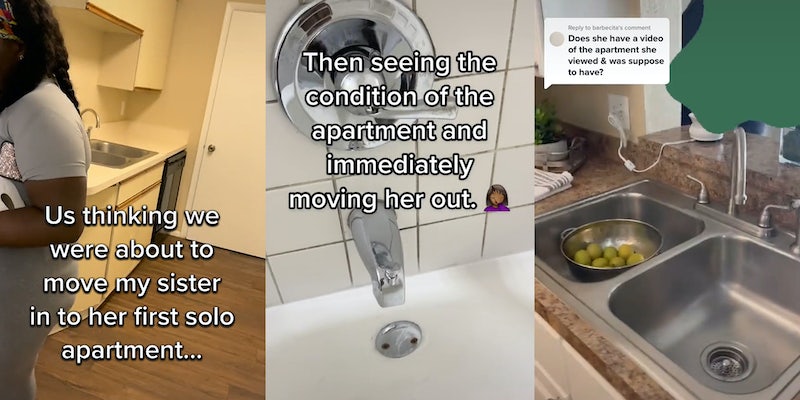 She hadn't toured the exact unit, which cost over $1,400, before signing.

A woman on TikTok shared a series of viral videos showing the condition of what was supposed to be her sister’s new apartment. However, the first video’s lack of context sparked debate in the comments about expected living conditions.

TikToker Taliah Marie’s (@_lovemarieexo) initial video showed an apartment in Seminole Country, Florida, that was way below the standards of what they were expecting for the price her sister agreed to.

The creator’s first video kicking off the series of TikToks has been viewed over 2.2 million times. The overlay text reads, “Us thinking we were about to move my sister into her first solo apartment. Then seeing the condition of the apartment and immediately moving her out.” Marie uploaded the video with the platform’s trending sound, “I wanna go home.”

While Marie’s sister did view a similar unit before signing the lease, the creator claims the unit she ended up with was not the one that was promised to her. In a follow-up video, Marie takes us through the apartment, showing rusty hinges on cupboards, black-colored grout in the shower, and alleged ants in the kitchen cabinets.

“We ended up not even trying to clean it at all because this was just unacceptable for the price that they were asking for this place,” Marie says in the video as she inspects the refrigerator.

@_lovemarieexo Reply to @ariiways It was a LONG day to say the least. Let me know if you guys wanna see the actual apartment she ended up moving to! 😩😇 #fyp #viral #fail #apartmenttour #scam #fypシ #blackgirltiktok ♬ original sound Taliah Marie

The TikToker clarifies in another video that the asking price for the one-bedroom apartment in April was $1,331, which she says was way too much for the condition of the apartment. Marie commented on Saturday that as of that morning, the price has allegedly increased to $1,416 for that same unit.

Her sister was able to “break” the lease without penalty fees after explaining the situation, presumably to the property manager, Marie says.

She claims they explained that the apartment was not renovated like it was supposed to be, it was not move-in ready and required deep cleaning. According to Marie, the property manager apologized and helped her in finding another place in a sister community, which they moved into that same day.

Marie uploaded another video showing the new apartment, which was “literally perfect.”

“The price was more but for a better-looking apartment in a better state, it was just something that we were OK with,” Marie says.

Marie’s first TikTok garnered hundreds of comments supporting her sister’s decision to not move in, agreeing the apartment was not up to par. However, several debated whether the women’s standards were too high. One commenter wrote that they themselves must be “poor” because they don’t see anything wrong with the apartment. Many viewers were unaware of the apartment’s cost at that time, and Marie replied with a TikTok.

“I understand some people have lived in situations like this or grew up in situations like this,” she says. “I understand to keep a roof over your head it’s acceptable for some people. But if you have the means to not live like that, I don’t see why you would choose to. Fortunately for us, we did have the means to help my sister get a better apartment.”

The Daily Dot has reached out to Marie via Instagram direct message for this story.

In an email to the Daily Dot, Marie says because of the crazy rent spike in Florida, apartment hunting was very frustrating. She also shared further details about their disappointment with the apartment.

“When I made that comment about people having to keep a roof over their head, I realize it may have been poor word choice, but simply put, it was both about the price for that condition and the condition itself,” Marie wrote.

“When you book a hotel, Airbnb, etc… you do not expect to come into a disgrace, you expect to get at the least, a clean space to walk into, that’s the least,” she continued. “The same energy should be kept with walking into your new apartment.”

Marie and her sister were satisfied with how the situation was resolved and encouraged others to speak up about any concerns or questions you may have when apartment hunting.

“I wish people would realize that sometimes it’s as simple as speaking up for yourself,” Marie said. “The reason some people find this to be so normal is because we’ve allowed it and haven’t held these companies and landlords to higher expectations. This is where people have to lay their heads at night, where they spend their hard-earned money on rent every month. Tenants should not have to come out of their pocket to fix or deep clean messes they didn’t even make when moving into an apartment.”