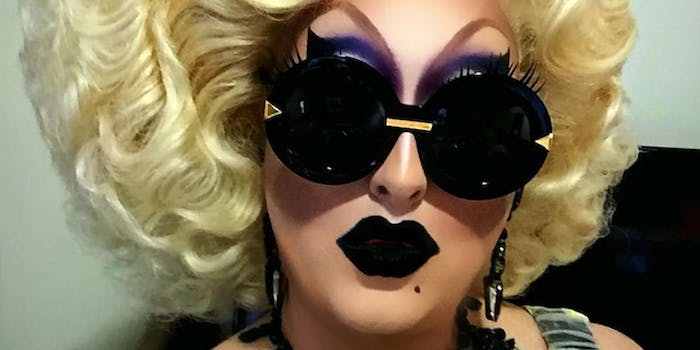 'I truly apologize to everyone I have hurt with my actions.'

RuPaul‘s Drag Race star Sherry Pie was disqualified from the show on Thursday after BuzzFeed News reported that five men accused the drag queen of posing as a casting director named Allison Mossie and catfishing them.

Sherry Pie, whose real name is Joey Gugliemelli, admitted to the acts and said in a Facebook post that he is sorry that he “caused such trauma and pain” and that he is “horribly embarrassed and disgusted” with himself.

Actor Ben Shimkus wrote in a Facebook post on Wednesday that he heard about Allison Mossie when a friend recommended he audition for a new play in New York City and gave him Mossie’s email. He wrote that Mossie seemed interested in his work and asked him to perform things that “felt particularly sexual and awkward.”

“The opportunity seemed too good to let the overt sexual nature or my inhibitions get in the way,” Shimkus wrote on Facebook.  “I simply told myself that my parents wouldn’t be allowed to see the show, but I wanted the professional experience and the bright and shiny object on my resume.”

Shimkus wrote that he attended Cortland State University’s Musical Theatre program with Gugliemelli, and their relationship had an extensive history. He wrote that he determined Mossie was Sherry Pie by talking with friends who also encountered the “casting director.” He wrote that “wherever Sherry seemed to go, Allison would follow.”

“When I began telling my friends about what had happened to me, one of my best friends told me that a colleague who had worked at a theatre doing Hairspray with Sherry also had the same experience with Allison Mossey,” Shimkus wrote. “Since being open about my experience, six people have corroborated stories with me.”

In his post, Gugliemelli wrote that he is seeking help and receiving treatment.

“I truly apologize to everyone I have hurt with my actions,” Gugliemelli wrote. “All I can do is change the behavior and that starts with me and doing that work.

Gugliemelli did not immediately respond to the Daily Dot’s request for comment.

According to BuzzFeed News, a spokesperson for VH1 and production company World of Wonder said Gugliemelli would be disqualified from the RuPaul’s Drag Race but that the network “will air the season as planned.” Gugliemelli will not appear in the show’s finale, which has not yet been filmed.

VH1 did not immediately respond to the Daily Dot’s request for comment.

“With a larger platform, she has the ability to do this to more people,” Shimkus told BuzzFeed News. “And I wanted to fight against that.”

Shimkus’ post has over 1,500 reactions and over 575 shares. On Twitter, people demanded that Gugliemelli be held accountable.