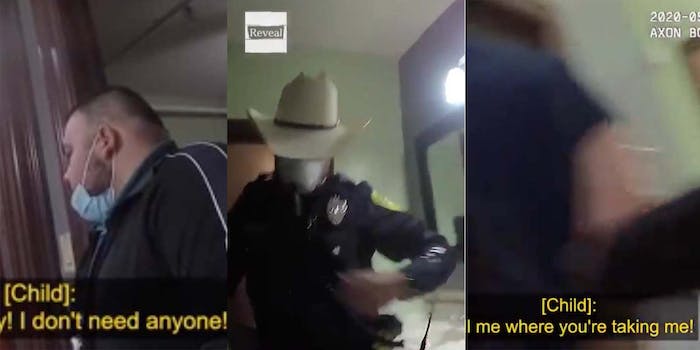 The sheriff tases the teen for 35 seconds as he yells and writhes in pain.

A newly released video shows a sheriff in Texas tasing a migrant teen at a shelter and calling him “el stupido.”

The video was released by Reveal News on June 8, and it shows Bexar County Deputy Sheriff Patrick Divers tasing the teen at the Southwest Key migrant shelter in San Antonio for 35 seconds.

As reported by Reveal News, a subsidiary of the Center for Investigative Reporting, the 16-year-old migrant teen staying in the Southwest Key Casa Blanca shelter broke beds and other objects in the facility. Staffers at the shelter contacted the Bexar County Sheriff’s Office for assistance.

In the video, taken from Divers’ body camera, Southwest Key Casa Blanca Program Director Ricardo Cisneros is seen attempting to calm the teen, to no avail. As pointed out by Reveal News, Diver does not investigate the broken furniture.

After his partner, Harold Schneider, arrives at the scene, Divers says, “I’mma tase this kid.” Divers proceeds to tase the teen for 35 seconds as he yells and writhes in pain.

After the teen asks where the deputies will be taking him, Schneider calls him “el stupido.” According to Reveal News, the teen was arrested and charged with criminal mischief. His grandmother told Reveal News that the incident has “made him suicidal.”

The Daily Dot reached out to Cisneros, who reportedly saw the tasing firsthand. Cisneros told the Daily Dot he is unable to “give any further statement about the incident,” because Southwest Key Casa Blanca shelter is “federally funded.”

Adelina Simpson, a change management technician with Bexar County, told the Daily Dot that “deputies gave the juvenile verbal commands and when the juvenile was non-compliant, the responding deputy tased the juvenile and then detained him.” Bexar County Sheriff Javier Salazar then initiated an Internal Affairs investigation into how the situation was handled.

This is not the first instance of the tasing of migrant peoples being caught on film. PBS’s 2012 documentary Crossing The Line reportedly showed border patrol agents tasing and beating an immigrant man, who later died.

Although border patrol agents are reportedly not subject to the same scrutiny as police officers, sheriff’s usually are.

When reached for comment by the Daily Dot, Southwest Key Programs called the video “distressing and hard to watch.”

“Our staff uses de-escalation strategies in difficult situations, and we request law enforcement help only in cases where the minor presents a danger to themselves or others,” it said. “It should be noted that it is rare and not common for us to involve law enforcement, and we only do so in the very few situations where there is a clear danger to an individual or a staff member.”

“The safety of those in our care and our staff is Southwest Key’s top priority. We take this responsibility seriously, and our staff works hard to provide compassionate, quality care.  Our childcare providers have significant experience in trauma-informed care and follow best practices for de-escalation. They make a concerted effort to understand each individual child’s needs so that we can provide the best care possible during the short time they are with us,” it continued.

Update 12:12pm CT, June 10: This article has been updated with comments from the Bexar County Sheriff’s Office and Southwest Key Programs.