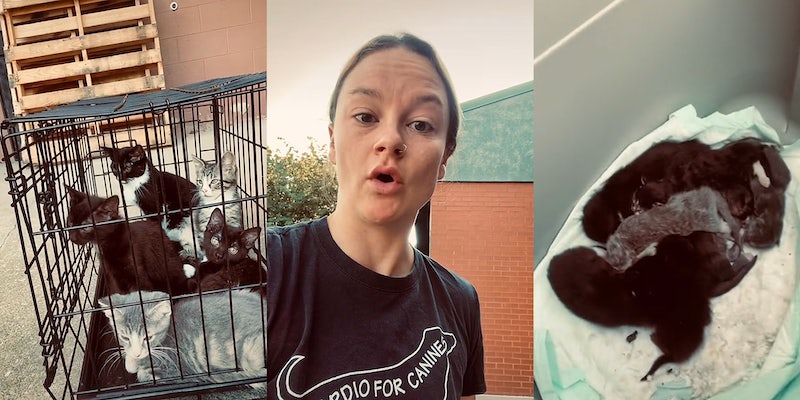 ‘This is so unacceptable and AVOIDABLE’: Shelter worker who found 23 cats dumped in cages outside shares the reality of her work

'Shelters never get to catch up, it’s always a flood.'

A staff member at the Vanderburgh Humane Society in Indiana came into work to a distressing site—23 cats, including two litters of newborn kittens, dumped on their porch in 90-degree heat.

The employee shared a video of the abandoned cats to the Evansville-based humane society’s TikTok page, where it received over 588,000 views and a wave of support.

@vhslifesaver I came into work this morning with 23 cats waiting on our back porch. Its is 90 degrees here in Evansville. No food, no water, no supplies, no shelter from the heat or predators, no money to help pay for their care. They were dumped & left for our already exhausted staff to tend to when we are SO full with animals as it is. This is so unacceptable & AVOIDABLE. If you’ve never fostered, please consider. If you can’t foster, please donate what you can! And above all… SPAY & NEUTER your animals. It makes a difference😿 #spayandneuter #wearetired ♬ original sound – Vanderburgh Humane

It was unclear how long the cats had been out there, but they were all left without food or water. While some were placed in appropriate pet cages, others weren’t so lucky.

One cat, along with her litter of kittens, was shut in a plastic box with a handful of rough air holes punched in the lid and a chunk of wood holding it in place. Worst of all were the litter of newborn kittens, separated from their mother and left in an open-topped plastic tub, at risk not just from the sun but the raccoons and feral dogs that roam the area.

“Do better, people,” the worker says in the video.

Though its unusual for so many animals to be dumped at once, coming in to find pets abandoned behind the shelter isn’t, another employee says in a follow-up video. While some people choose to anonymously abandon their animals like this in order to avoid paying the surrender fee, something Vanderburgh Humane is willing to reduce or waive depending on circumstances, the shelter speculates that a more significant factor is likely to be impatience on the owner’s part.

As Vanderburgh Humane operates an open admissions shelter, meaning they never refuse to take an animal, pets have to be surrendered via appointment, and some people just aren’t willing to wait a week or two in order to do that.

Many viewers in the comments argued that abandoning the cats outside of the shelter was better than getting rid of them by other means.

“I mean, at least they weren’t thrown in the trash or on the side of the road. They were taken to, what’s supposed to be a safe haven,” one user wrote.

“At least they’re not being dumped in the middle of nowhere,” another said.

However, as a staff member notes in an additional follow-up, the abandonment of animals without consideration for their appointments can cause the shelter to be even more overwhelmed.

She notes that the 23 abandoned cats had to be taken in, despite already having 45 cats scheduled to be surrendered to the shelter that week. “So we have 68 cats that we have to find places for, instead of just the 45,” she says.

Of course, this causes serious problems for the shelter as the number of animals they’re having to house and care for has gone up drastically, with no increase in budget or donations to help get them through it.

Many viewers sympathized with the shelter workers in the comments.

“I can’t imagine how overwhelming it would be. Just seems like shelters never get to catch up, it’s always a flood,” one viewer wrote.

“There needs to be a free or low cost spay/neuter clinics to help end the dumping of pets,” another suggested.

The Vanderburgh Humane Society responded, “We have our own low-cost clinic in-house here, but it is always booked and there is not enough staff or funding to expand. You are right! Much needed!”

However, the shelter workers and volunteer foster families have stepped up to care for the extra animals, and while one kitten was lost due to health problems, the others are all now doing fine. The shelter staff even named the one adult male of the bunch “Nick Cannon,” as they had joked that he could be the father of all the kittens.

In the update video, a Vanderburgh Humane staff member says they hope these videos have opened people’s eyes to the harms and dangers of abandoning pets like this, and more people will surrender them properly in the future.

We have reached out to Vanderburgh Humane via TikTok comment.