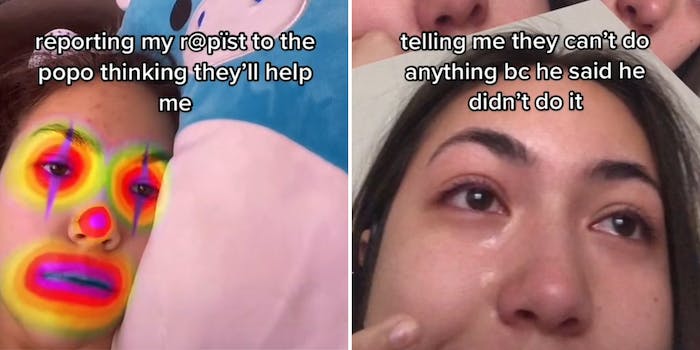 ‘The justice system is a joke’: A TikToker is calling attention to why people don’t report their sexual assault to the police

Hundreds of commenters shared how police failed them when they tried to report their sexual assaults.

A TikTok video is shedding light on why many women don’t report their assault to the police.

On May 11, @thesoulhaven posted a video of herself with the viral Be A Clown soundbite and filter by Gita. She shares that she reported her rapist to the police, but the police failed to take action on her behalf. In her caption, the user writes, “and they wonder why most go unreported…”

The creator is correct: According to RAINN, of every 1,000 sexual assaults, only 310 are reported to the police. Of those 310 reports, only 50 will lead to arrests. To boot, there’s a backlog of over 70,000 untested rape kits in the United States.

The creator claims the police told her “they can’t do anything bc he said he didn’t do it.”

One user wrote in, “I was told “he’s only 16 we dont wanna ruin his life” and “youre 16 you should’ve known better” in the same breathe by them.”

While another commented, “they deadass coddled him “don’t worry we get calls like this all the time” but i sat there & cried my eyes out telling them every detail.”

Another said, “cops told me “he’s too young to understand what he’s doing,”

Unfortunately, this isn’t an uncommon experience. 1 out of every 6 American women experiences rape or attempted rape in their lifetime, according to the Rape, Abuse, and Incest National Network. Sexual violence impacts the survivor on psychological, emotional, and physical levels, and can lead to post-traumatic stress disorder, anxiety, and depression. And yet, less than 1% of rapes result in felony convictions.

The Daily Dot has reached out to @thesoulhaven for comment but was not met with an immediate reply.