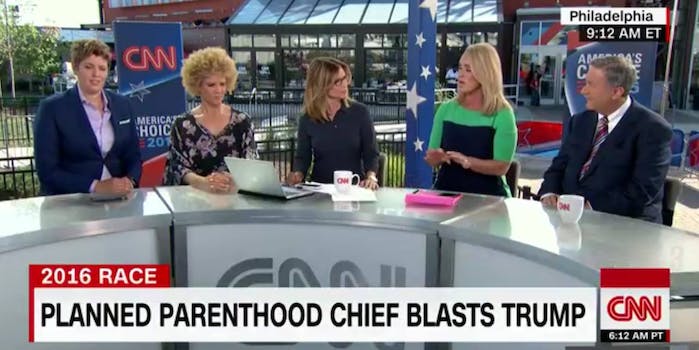 CNN commentators could barely keep their composure when a conservative editor theorized about 'sexism.'

.@scottienhughes: If a woman votes for Hillary Clinton just because she's a woman, that is sexist https://t.co/4wwMS7i6Bv

Hughes appeared on CNN the day after Clinton’s historic nomination as the Democratic Party’s candidate for president. During her segment, Hughes also noted that Clinton shouldn’t have excluded boys from her speech, when she said, “If there are any little girls out there who stayed up late to watch, let me just say, I may be the first woman president, but one of you is next.”

“That’s the problem,” Hughes said on CNN. “We continue to say we want equality, we want equal [sic], but we then tear down one group and try to build up another.”

CNN political commentator Sally Kohn could not contain her WTF face while Hughes made her argument.

This one is even better! pic.twitter.com/An3Td5VsXL

On Twitter, Kohn noted that she had to hold the hand of commentator Micheala Angela Davis in order to keep her composure.

The actual Webster’s dictionary definition of sexism is defined as “the unfair treatment of women.” What Hughes is referring to—though, many would argue, still tangentially—is discrimination. It might also help Hughes to read this very informative Reddit thread.

Hughes has a history of making controversial statements. Last week, she said on CNN that she hoped she didn’t have to “brush up on my Dora Explorer” to understand what Tim Kaine was saying.

She also defended Donald Trump’s use of “Pocahontas” to refer to Elizabeth Warren.

She also encouraged women to vote for Trump to fight for the rights of “unborn women.”