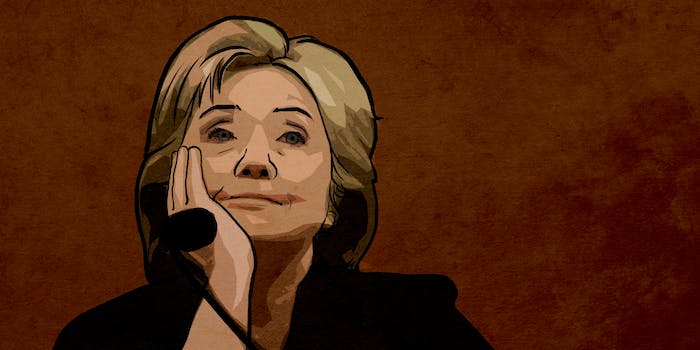 Old media is old—and people on new media aren't happy about it.

Yesterday was a historic day for America, marking the official nomination of the first female candidate for president by a major party.

“If there are any little girls out there who stayed up late to watch, let me just say, I may be the first woman president, but one of you is next,” Hillary Clinton told supporters via video after clinching the nomination.

The moment was marked on social media by women posting pictures of themselves and their daughters near the television. Other people cried.

However, some newspapers chose to mark the moment by printing large pictures of Bill Clinton on their front pages.

Some newspapers must have read the wire wrong and put the wrong Clinton on front #justsaying #DemsInPhilly pic.twitter.com/R1NIKFTxcH

But not all newspapers. The Wall Street Journal featured a picture of Bernie Sanders.

And then, at some point, switched its cover image to Bill, and then to Hillary after she appeared via video.

Many versions of @WSJ Page One – Bill came first, then switched to @HillaryClinton when she appeared #DemsInPhilly pic.twitter.com/apJJvPjRRy

Washington Post spokesperson Kris Coratti told the Washingtonian that the reason behind the decision to put Clinton’s husband on the cover was because Clinton herself did not appear onstage last night, whereas Bill did, and there was “no good photo opportunity” of Hillary available.

She was on a live video very late in the evening, making for a poor photograph. Bill Clinton’s speech was the big moment, and another big moment was when Bernie Sanders moved that she be given the nomination by acclamation. So we carried those two photographs.