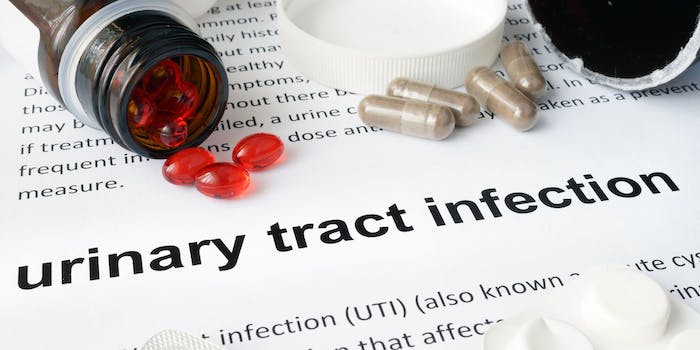 The truth about having sex with a UTI

Hint: Listen to your body.

We all remember where we were the first time we got a UTI. OK, maybe not the exact where we were (or even with whom) the moment unwanted bacteria traveled up our urethras and into our bladders, but we definitely remember the first time we experienced the symptoms of a urinary tract infection: that obnoxious, insatiable urge to pee, followed by the excruciating pain of trying to relieve that urge.

My “first” was also my first day at a new job. While my boss was pointing out credible sources to fact-check a story on some C-list actor, I was scoping out the closest bathroom and daydreaming about the cranberry juice I’d slam during my lunch break—because nothing screams “I didn’t clean up well after sex and now I have to flush out a UTI” like swigging a jug of cranberry juice at your desk.

My fear of potential embarrassment is emblematic of the stigma around UTIs (or any sex-related medical ailment in general)—a stigma that’s unwarranted since half of all women will likely have a UTI in their lifetime, and nearly all women who get UTIs get it from sex. A UTI is not to be confused with an STD (you cannot get a UTI from a partner who has one), but women often get it through sex because their urethra is fairly close to their anus, and therefore it’s easier for E. coli (yes, fecal bacteria falls under the E. coli umbrella) to travel from one hole to the other, whether by fingers, toys, penises, or other body parts. In that sense, you can also get UTIs from wiping in the wrong direction; just in case you forgot what your preschool teacher told you, the right way is front to back.

Because of their anatomy (i.e., their pee hole isn’t too close to their anus), men aren’t as likely to get UTIs. About 15 percent will suffer through one in their lifetime, and that usually has to do with anatomical abnormalities or may be a complication of an enlarged prostate, diabetes, or HIV. So men should get their UTIs checked out, because it could be a symptom of something worse.

In fact, any UTI sufferer should make a doctor’s visit. Many believe, like I did, that cranberry juice or cranberry pills can rid you of a UTI. And while they do offer hydration and help wash bacteria from your body, medical professionals insist that you get yourself over to a doctor’s office for a prescription of antibiotics, which will usually clear it up in several to seven days. This is something I can attest to; that lunch jug provided little relief compared to the pills I was prescribed the next day.

“Antibiotics are the only way to cure a UTI,” says Dr. Heather Smith, an OB-GYN at Montefiore Health System and assistant professor at Albert Einstein College of Medicine. “It is imperative to complete the entire course as prescribed by your doctor, even if the symptoms get better before you finish the pills.”

Another thing you should avoid during those first few days: sex. The good news is that you probably don’t want to have sex when you’re living in that much discomfort. But for those who can ride through the pain, or prefer it, or simply have shitty willpower against the fast and furious love affair that got you into this state in the first place (ahem), the answer is still nope. Hold off. Your pained body is trying to tell you something.

“You are not at risk of giving your partner your infection since the UTI is not contagious. However, there are a few reasons why you might not want to have sex while you have a UTI,” says Dr. Smith. “The infection you have can cause the bladder and areas around it (vagina, pelvis, and urethra) to be irritated and lead to uncomfortable or even painful sex as well as the urge to urinate more often. Also, the activity and friction of sex can further irritate the tissues that are already sensitive and inflamed due to the infection.”

Dr. Smith suggests waiting a few days after starting antibiotics, once symptoms have improved or even disappeared. “If you’re uncomfortable or if it hurts, don’t do it,” she says.

One in three women will have reoccurring UTIs in their lifetimes, so as a preventative measure, Dr. Smith says to drink plenty of water, cranberry juice, or vitamin C—but most importantly urinate frequently before and after sex.

I honestly don’t remember having another UTI since that painful first day on the job. But that’s probably because I’m now less about post-sex cuddling and more about preventative peeing.