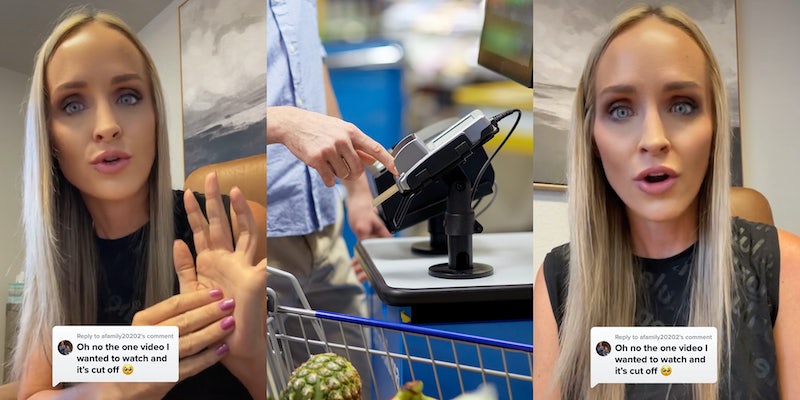 'You are fighting for your life trying to determine what day you were at Walmart.'

A lawyer on TikTok is advising viewers to avoid self-checkout, saying that some retailers are targeting them for loss prevention even in cases where nothing has been stolen.

Carrie Jernigan, an Arkansas-based criminal defense attorney, shares in her video that large retailers had previously been lenient on shoplifters and those who accidentally take something without paying for it. However, as shoplifters have gotten better at stealing more expensive items, Jernigan says stores are cracking down.

Her warning video received over 1.7 million views on the platform as of Saturday.

Jernigan broke the people she has seen get charged with shoplifting into three categories. The first two are those who intend to shoplift and those who do so unintentionally.

“The first group of people getting charged with shoplifting using the self-checkout are people going into the stores with the intent to steal,” Jernigan says. “The second group of people catching this charge, I will call the theft-by-mistake. These are the people that I genuinely think just forgot to scan an item. It is usually something that was on the bottom rack of the cart or say a DVD that has slid under the purse, and when they are walking out, asset protection stops them.”

The third group of people, Jernigan said, are targeted by a retailer long after they have gone to the store, often when inventory comes up short.

“It is something that, say, asset protection is doing a quality control check or inventory weeks, days, months later comes up short, so they will begin watching hours of video to see the last person who checked out with the Mario Lego set because they’re too short, or an Xbox game, and for some reason, they pinpoint that they think you did it,” she claims.

Jernigan then says corporations will prosecute with little evidence, so accused customers then have to spend time and money to prove themselves innocent.

“Because of who these big box stores are, they usually have to present very little evidence to get an affidavit or warrant signed,” Jernigan claims. “The charges that could land you up to a year in jail get filed, and then you are fighting for your life trying to determine what day you were at Walmart, what all you bought. You have to spend thousands of dollars hiring a lawyer and we have to go through grainy video footage to try to determine what all you bought that day.”

These types of cases, Jernigan said, can be lengthy and difficult to prove innocence, especially if someone accused had paid with cash, or doesn’t have a receipt and can’t prove that they paid that amount, or if the price they paid is correct. She said that once an attorney can prove their client has not stolen anything, the charges are often dropped, but “so much damage” has already been done by that point.

In a follow-up video, she advised viewers to only use self-checkout for small purchases, always pay with a card in case there needs to be a record of the purchase, keep receipts and be slow and intentional when scanning items.

Commenters on the videos shared experiences of loved ones or even themselves being charged for shoplifting while using self-checkout, regardless of whether it happened or not.

“My mom accidentally left a tiny $3 lemon oil in her cart after buying $300 in groceries,” one commenter wrote. “She was charged with theft and had to do community service.”

“Took me seven months and cost me $6,000 to clear my name after I was falsely accused and the evidence should have exonerated me immediately,” another commenter wrote.

“I forgot to scan an item once and now there’s a photo of me in Walmart’s system,” a commenter wrote. “No more self checkout for me.”

The Daily Dot has reached out to Jernigan via Instagram direct message regarding the video.