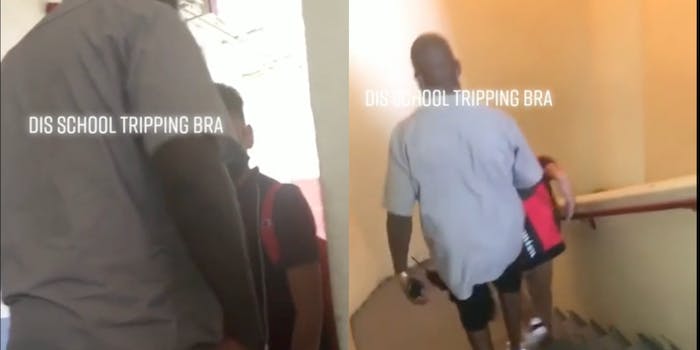 ‘When the bell rings, you’re in my hallway’: Video shows school employee punching a 7th-grader

He was arrested, but later posted bail.

A school security monitor was arrested and fired from a Florida school after he was caught on video punching a middle-schooler in the shoulder.

According to WSVN, the incident occurred on Thursday. In a cell phone recording of the event, the monitor, Antwan Ruffin, is seen shoving the child.

Ruffin is seen shoving the student first. The boy says something in response, but it’s not heard in the video. The 40-year-old monitor continues to scream at the child.

“Bring them all,” Ruffin said, referring to kid’s father and uncle. “I ain’t scared of none of them. Bring them all.”

After Ruffin asks whether the child wants a phone to call, he hits the kid in his right shoulder. Ruffin later holds him by his backpack and escorts the kid down a flight of stairs.

Ruffin was arrested by Miami-Dade Schools Police and charged with child abuse with no great bodily harm and battery, WSVN reports. He posted bond and was released on Thursday night.

In a statement to the outlet, the school district said: “Miami-Dade County Public Schools is deeply troubled and saddened by the actions of this individual, as they are not representative of our caring and supportive workforce.”

The district said it will be taking disciplinary actions against Ruffin including dismissal.