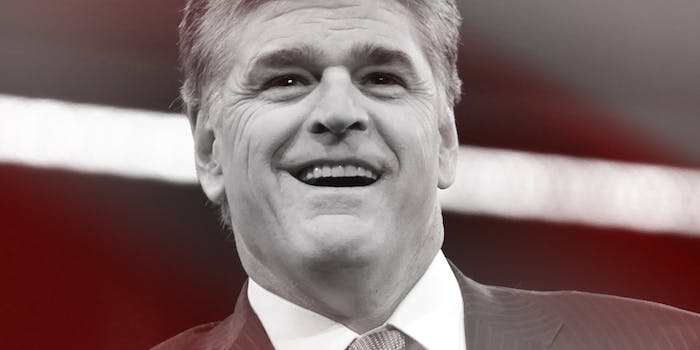 Is this 'Hannity' or a new Fox show called 'The Twilight Zone'?

“You don’t shoot an innocent person that’s not a threat in the back—that’s murder,” Hannity said.

Opposite Hannity in this debate was Jesse Lee Peterson, an African American conservative who once argued, in defense of President George W. Bush, that black people displaced by Hurricane Katrina were “lazy, immoral and trifling.”

“Right now, Sean, white officers are under attack by angry black folks in this country,” Peterson said. “And when they get stopped by police officers, they’re not listening. They are not obeying…the police officer.”

Peterson argued that Scott was not innocent because he had a warrant for his arrest. It appears, however, that said warrant—supposedly due to nonpayment of child support—may not exist. Court records obtained Friday by the Associated Press raised doubts about the warrant, which has nonetheless been heavily publicized by the media.

“We cannot have in this country—look, you talk about the officer is innocent until proven guilty, that tape is overwhelming, incontrovertible evidence that this man was shot innocently in the back,” Hannity continued. “He’s not the judge, jury and executioner here. He doesn’t get to fire against the guy that’s not a threat to anybody.”

Marc Lamont Hill, a BET News host and CNN commentator, tweeted that Peterson was an “Uncle Ruckus,” a reference to a black character on The Boondocks who rebukes his own race.

“This may be the most disgusting conversation I’ve ever seen,” he wrote, linking to the above YouTube video.

Civil rights attorney Leo Terrell, who was also a guest on Hannity’s program, stood up and walked off set after Peterson told him to stop “overreacting” to incidents like the Scott shooting.

After Terrell left, Peterson called him “a little coward.”