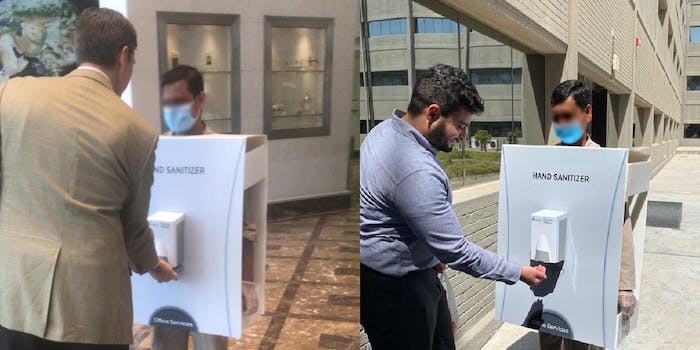 Company made worker act as a human hand sanitizer

'Man the humiliation in his eyes is just shattering.'

Photos surfaced on Tuesday of a migrant worker being made to act as a human hand sanitizer for Saudi Aramco, a Saudi Arabian oil company.

Middle East Eye notes that at least one of the photos appears to have been taken in Aramco’s Dhahran offices. After the photos went viral, Aramco issued a statement via Twitter. According to Middle East Eye, Aramco called the act “abusive” and said it wanted to stress how important it was for workers to be health conscientious amid the coronavirus (COVID-19) outbreak.

“The company has immediately stopped this act and has taken steps to prevent it from happening again,” the company’s statement reads, per the Middle East Eye.

Twitter user @HishamFageeh originally posted the tweet, which has since racked up over 3,000 retweets, and sarcastically captioned it, “Gulf class, a gift from Aramco,” per the Middle East Eye.

Many dubbed the act degrading, racist, and modern-day slavery.

“Man the humiliation in his eyes is just shattering,” Twitter user @hannxbaI wrote.

It’s unclear whether the man is Asian, but there has been an uptick in anti-Asian racism ever since the disease’s outbreak began.

New York also came under fire on Tuesday for trying to solve its hand sanitizer shortage by having prisoners make 10,000 gallons of it for less than 65 cents an hour.

“Wow. between New York prisoners being forced to make hand sanitizer and this..the ruling class is really taunting the rest of us,” writer Ayesha Siddiqi tweeted.

The Daily Dot has reached out to the users who originally posted the photos of the worker.

Aramco’s Texas office did not respond to the Daily Dot’s request for comment.