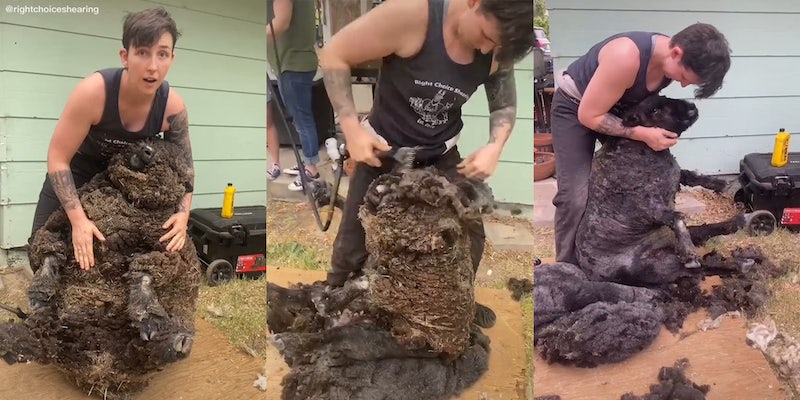 The art of satisfaction is smoothing customers' brains.

Katherine McRose has been shearing sheep, llamas, and alpacas for over 13 years. But it wasn’t until early 2021 that she and her wife, Darian, of Right Choice Shearing (@rightchoiceshearing) took their talents to TikTok—where they’ve now amassed over 2.5 million followers—to showcase how wool looks when it is gracefully sheared off an animal covered in pounds of it.

One of the first videos on McRose’s account shows her shearing a llama. The video is quick: The viewer sees one swipe of McRose’s shearer, and then the machine whirs as the camera pans to the llama’s face. From the looks of the TikTok, you wouldn’t guess that McRose’s followers follow her and Darian because their videos are satisfying to watch. The video doesn’t emphasize McRose’s movements or the wool rolling off the animal.

But recent videos show a perfected formula: In a TikTok from March 31, McRose shears an alpaca. Her strokes with the shearing machine are captured from above, so the viewer can see the wool as it falls. Each of McRose’s movements is smooth and similar, which easily mesmerizes the viewer. Plus, the sound of the machine has been eliminated and replaced with 50’s Cent’s “P.I.M.P.”

At the end of the video, McRose runs her hand through the pile of wool, and the viewer can almost feel the soft fibers on their fingertips. If reading about one of McRose’s many visually pleasing videos is enjoyable, just imagine watching one.

So many people do: @rightchoiceshearing’s TikToks are all varying degrees of viral, and dozens have millions of views.

The McRoses aren’t the only TikTok creators who have capitalized on the uniquely satisfying nature of the videos they take of their work. From dog grooming to paint mixing, hair detangling, and body waxing, TikTok creators are sharing their handiwork and racking up massive follower accounts and views. Plus, some of them are benefitting professionally from doing so from the TikTok creator fund, brand partnerships, and all of the new clients they’ve gained from TikTok.

The Daily Dot spoke with five TikTok creators who make niche, satisfying videos about what goes into creating content while staying at the top of their game at work. While millions of views don’t always equate to millions of dollars, the creators believe the satisfaction they and their viewers derive from their content is good for business—and for people’s brains.

The advent of recreational slime in 2016, as reported by Paper, and pimple popping videos around 2017 brought on many articles about why some find “oddly satisfying” videos satisfying at all. It turns out that the videos boost serotonin and dopamine, Lemonade reports, and activate neurons in our brains that allow us to “derive pleasure from these videos as if they were actually conducting the action themselves,” according to Wired U.K.

Dog groomer Logan Rago (@dogsbylogan) thinks the dopamine and serotonin release has to do with the transformations that viewers experience in under a minute while watching his videos.

“I’ll get these like dirty dogs, and they get to watch within the minute, usually, how I transformed this dog into a brand new creature,” Rago, who has almost 470,000 followers, told the Daily Dot in a phone interview. And yes, he finds it satisfying to watch his own videos and usually doesn’t post any of his grooming videos that turn out to not be satisfying.

Rago’s first viral video was of a much-needed haircut he gave to a matted dog named Frank. Even though Frank’s owners only wanted their dog to get a trim, Rago had to shave off Frank’s mats. That video of Frank, posted on October 21, now has over 2.2 million views.

Matts and tangled fur do well for @rightchoiceshearing, as well: McRose’s TikTok of her shearing overgrown baby doll sheep from May 2021 has almost 70 million views.

The transformations that Hadassa Felix of Love 518 (@love518salon) salon embarks on are a bit different. She detangles all different kinds of matted (human head) hair instead of cutting it off. Felix thinks that she—and her more than 337,000 followers—enjoy her hair detangling process because it’s like solving a puzzle.

“I like things that’s challenging to my brain,” Felix told the Daily Dot in a phone interview. “I never thought it would be [hair detangling] that would be that for me. I’m satisfied from it.”

Though shaving animals and detangling hair can be visually pleasing for the viewer on their own, some TikTok creators rely on other elements to make their videos as satisfying for viewers as possible.

Artist and painter Chris Breier (@chrisbreier), who makes color-matching videos by mixing paint to match the color of objects or parts of nature for his more than 1.6 million followers, says that he gets requests and compliments about the voiceovers he does for his videos. In an email to the Daily Dot, he said that he’s not sure if it’s his voice or cadence but that viewers have said it adds to the allure of his videos.

In a recent TikTok wherein Breier matches the color of a chrome tape measure, he describes how he mixes foundational colors, like “ultramarine blue and pyrrole red,” in a soft tone. His Buffalo, New York, accent sounds comfortingly Midwestern.

In addition to using hashtags like #colormatching and #oddlysatisfying, Breier added #asmrvoice as well to pick up any views that his voice might add as well because his videos have a similar effect to autonomous sensory meridian response (ASMR) for some viewers, meaning that his voice gives some viewers a positive sensory response.

“Some people comment that they like to watch my videos when they’re struggling with anxiety, Breier told the Daily Dot. “It helps to distract them from their concerns so they can calm down.”

Voiceovers also add to the experience because some viewers feel even more satisfied when a creator explains their process, according to waxer Elizabeth Jaramillo (@glowlizzyy).

Her voiceovers almost always include her comments on the roots of hairs she waxes, too: In her TikTok posted on Nov. 29 that has almost 53 million views, she says “look at those roots!” in a voiceover while she shows a wax strip full of hair.

“I think that is super satisfying to know that you got [the hair] out completely,” Jaramillo told the Daily Dot in a phone interview.

Jaramillo, who has over 187,000 followers on TikTok, also says that she focuses on the angle that she films from, which she calls an “eagle eye view.” From scrolling through her comment sections, Jaramillo has learned that her followers want to see “everything,” to the point that she has started to prop her phone up near her face to make sure that viewers see what she sees while she’s waxing.

“I just try to show people what I would want to see,” Jaramillo told the Daily Dot, who understands that not seeing the specifically transformative element in a satisfying video can be frustrating and have the opposite effect of the video’s intention.

Speed is another crucial factor. All of the creators interviewed for this article manipulate the speed of their videos to ensure that the entire process and/or transformation in the video not only fits into TikTok’s 15-second or 1-minute length guidelines but also allows viewers to feel satisfied as soon as possible to drive engagement with videos via likes, comments, and shares.

All five creators benefit personally and/or professionally from posting videos of their work. Dog groomer Rago and waxer Jaramillo both said they have been able to partner with brands and receive products to use on their clients—which has earned Rago between $1,000 and $1,500 and Jaramillo around $6,000 (she has also earned $3,000 from TikTok’s creator fund).

Breier said that he has received requests for art commissions and other business opportunities, and he even released a video course that costs $29 on color mixing in late 2021. He said he earns between 75 cents and “hundreds of dollars” daily from the creator fund based on how viral his recent videos are.

Hair detangler Felix revealed that she has received up to $120 installments from the creator fund. And since posting detangling videos on TikTok, as many as 70% of her clients request detangling appointments, which she finds incredibly fulfilling. She said because many of her clients’ hair is matted as a result of depression or another event that dissuaded them from caring for their hair, she is honored to help them usher in a new chapter in their lives.

“I really want to help these women,” Felix said. “I’m able to detangle someone’s hair, not only just removing all that old hair, but I counsel them. I talk to them. I hear their stories.” Felix said that many of her clients fly to her salon in Miami just for her specific expertise.

Having such a large TikTok platform is personal for shearer McRose, too. While she says that she doesn’t use TikTok to find new clients, it means a lot to her to spread awareness about shearing, a commonly misunderstood industry.

“I have never done it for the money,” McRose said of sheep-shearing. “It’s always been for the right reasons to help these animals.” (McRose shared that she doesn’t participate in any partnerships and hasn’t made a “significant” amount from TikTok.)

Plus, communicating with followers and showing the world what a joy connecting with and gaining the trust of animals through her work is meaningful.

“I have the power to spread something to millions of people and I need to be very cognizant about, you know, am I bringing happiness to the world?” McRose said. “Because if you’re not, it would be so easy to bring about negativity.”