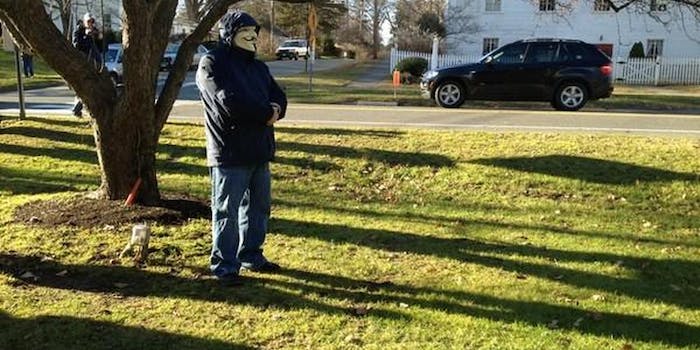 The continued saga of hacktivists' war on the WBC and Twitter trolls now encompasses Anonymous, UGNazi, Rustle League, the Westboro Baptist Church, the KKK, and some random pedophile.

So saith the Jester, a self-described “patriot hacker” and longtime foe of Anonymous.

Once all of those groups—plus the KKK (keep reading)—got stirred up, it would have taken divine intervention to rescue the Westboro Baptist Church, and that was not forthcoming.

In Sandy Hook to protest at the funeral services of the victims of the mass shooting, the WBC was apparently expecting business as usual: hostility from locals, tons of press.

That they should have expected Anonymous is as true as it is cliched.

As covered extensively in the Daily Dot, Anonymous has become increasingly activist (those who believe hacks and trolling should be completely amoral would call this “white knighting” or “moralfagging”) and increasingly active offline. The tragedy of the school shooting at Sandy Hook, and the outrage of its innocent victims having their funeral services picketed by a homophobic and litigious organization, galvanized hacktivists from all corners of the Internet, bringing them together in #OpFuckWBC and #OpWestboro.

UGNazi, the crew of almost superhumanly talented teen hackers; Anonymous, the amorphous collective born from 4chan’s troll dungeons; the Jester, advocate of law and order, Anon’s enemy; thousands of civilians: All these joined together to make sure Fred Phelps and his crew at the WBC would never forget Sandy Hook.

Anonymous called for its members to converge on the town and keep the WBC members under surveillance. It worked rather well. WBC members were literally hounded from a Burger King (it’s unclear if they ever got fed) and changed their hotel at least once in a nervous fluster after Anonymous released the location. They reportedly downgraded themselves all the way to a Motel 6. “Heritage hotel saying that WBC is not there anymore. Who wins? We Win!” tweeted @YourAnonNews.

Yesterday, the account was suspended briefly, reportedly for tweeting a link to a dox containing WBC’s private information. This included social security numbers, addresses, phone numbers, and emails. When @YourAnonNews returned, it had gained so many followers in sympathy that the account now boasts more than 1 million, all thanks to Twitter and the Westboro Baptist Church. Well, and the Streisand Effect.

According to UGNazi and Rustle League member Shm00p, “So @twitter suspends Cosmo, YAN, LulzExecutive, & myself, for wanting to help the CT victims? That’s some pretty good logic, brb gravy bath.” Currently the only account suspended is Shirley Phelps’s @DearShirley.

When the Ku Klux Klan indicated that they would head to Sandy Hook to take part in the human walls keeping the WBC from the mourners, Anonymous decided that “the enemy of my enemy is not my friend.” Anon, possibly in concert with UGNazi allies, took down the Klan’s main website, just to give them the hint they were not wanted.

The human walls so far have consisted of Anons (both with and without masks), townspeople, bikers, police, and firefighters. They will continue over the weekend to protect the remaining funerals, or until the Westboro Baptist Church has finally left town. Ten funerals have already taken place.

UGNazi put its considerable hacking skills to work, taking over Shirley Phelps‘s and Fred Phelps Jr.‘s Twitter accounts in the name of Cosmo the God, the 15-year-old hacker who earlier in 2012  was sentenced to have no unapproved computer use until he turned 21. Given UGNazi’s history of pranks, it’s likely that Cosmo himself did not perform the hacks (he did not respond to inquiries from the Daily Dot) and this is probably a troll by his crewmates using his twitter account.

But what judge in his right mind would revoke a kid’s release for this? Only one that didn’t care about being re-elected, ever.

The takeover of the Twitter accounts inspired the hashtag #GodSenttheHacker, in direct response to WBC’s claim that “God sent the shooter.” Cosmo and most of the UGNazi crew all attached “God” to their usernames (Josh the God, Cosmo the God, Shm00p the God), and fittingly, they now have a new legion of awestruck worshippers. A Topsy search indicates that in the last two days, the hashtag has been tweeted more than 5,000 times. The Fred Phelps Jr. account is up 1,000 followers overnight as a result. The last thing the account did was tweet out the names of the victims one by one, saying, “Rest in Peace.”

When online trolls popped up looking for trouble, the collective did not hesitate to give it to them. Unfortunately, a crisis-generated sense of urgency often works against meticulous research. When a fake Adam Lanza Twitter account, @Blastinkids, surfaced, doxing specialists got to work and quickly singled out one Jake/Jacob Dean Douglas as the perpetrator.

According to a participant in the investigation who wishes to remain anonymous (but is not Anonymous), the “original tip came on Dec. 15 by a 16-year-old boy who thought he may have been mentioned/threatened by @RabbiJewey.”

@RabbiJewey is another of Douglas’s trolling accounts, this one clearly pedophilic and anti-Semitic. “BEFORE #Newtown because of the @RabbiJewey Pedo Comments. A kid was scared by them and asked for help reporting this guy,” a source told us via DM. “The op was long in place before he made @BlastinKids!!!”

Another participant explained, “It’s really very funny @RabbiJewey our first Target from an earlier complaint, ….. 1st-followed @BlastinKids making it my own ‘fastest ever dox.’”

The owner of the accounts was already on the radar and had already been investigated and identified when he reportedly created the other account.

Unfortunately, according to the Daily Beast, the first dox that was released contained the wrong phone number, leading to some 600 irate phonecalls to a 71-year-old quilter who was not involved and didn’t even have a Twitter account. “We are not infallible,” tweeted AnonPsyOps.

Our source asserts that Douglas was behind all three accounts, and worked at the FAMS Recovery Solutions call center, which does collections on overdue accounts, until he was apparently fired recently. His Facebook profile has been deactivated, and the original dox deleted. Hackers have identified another phone number for him, but for obvious reasons we aren’t releasing it.

As the weekend and the holiday approaches, there have been unconfirmed reports that the WBC have left town. But the activists remain; after all, 17 funerals are still to come.