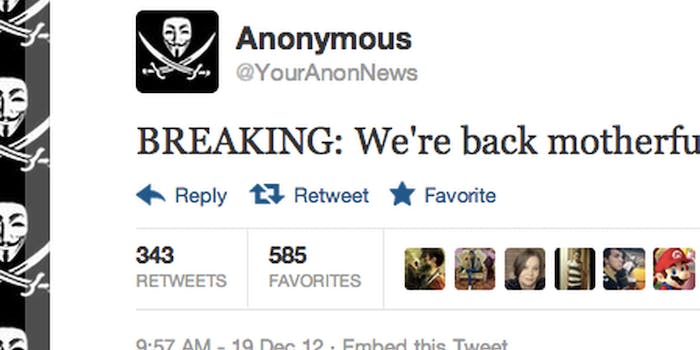 But eh, a few hours later, the account went back up.

@YourAnonNews, an Anonymous account that boasts 791,870 followers and tweets regularly about world news, was suspended Wednesday, surprising, it seemed, everyone. Many suspected that the reason was Anonymous involvement in releasing the personal information of members of the Westboro Baptist Church. Twitter terms of service prohibit such activity.

In a sense, they were right. According to a notice from Twitter, which @YourAnonNews screengrabbed and tweeted, the reason was “posting an individual’s private information such as private email address, physical address, telephone number, or financial documents.” Twitter cited the tweet, which as of press time is still available:

The tweet linked to an image, itself a screengrab of an email apparently sent to Westboro spokeswoman Shirley Phelps-Roper, that had the subject line “Worried – your Twitter is hacked.” Anonymous indeed did release information belonging to Westboro members, and someone claiming to be the teenager hacker cosmo the god announced control over Phelps’s Twitter account.

Part of Twitter’s notice to @YourAnonNews asks that users “confirm that you’ve read and understood our rules.” Elsewhere, it warns that “future Twitter Rules violations may result in permanent account suspension.”

A similar account, @AnonOpsSweden, went through a similar ordeal. After retweeting a link to a hacked site that seemed to include the private phone numbers of Spanish right-wing activists, that account was also suspended. Though it was reinstated four days later, Twitter then banned the account permanently in December. It cited “posting permanent information” again, but didn’t reveal what that information was.

“[T]hank you @Twitter, all the press about us being gone[; it] may help us reach 1M [followers]!” the account tweeted.