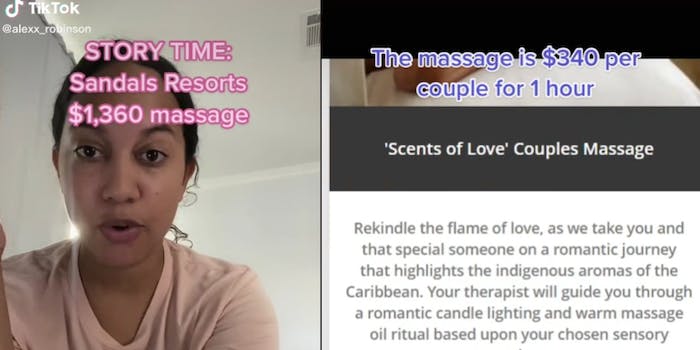 ‘It ruined my experience’: A woman alleges she was charged over $1,000 for a massage at Sandals Resort (updated)

'I was going to book with Sandals Resorts. Not anymore.'

A woman says she is using TikTok as a last resort after she was “scammed” by a Sandals resort and had to pay way more for a couple’s massage than she had anticipated.

Alex Robinson (@alexx_robinson) says that when she stayed at a Sandals resort with her husband, they booked a couples massage for $340. During their stay, they only had one massage. Robinson then shows a screenshot of the banking statement attached to her husband’s card, showing they had been charged for the massage twice. Another $680 was reportedly charged to Robinson’s card as that was the card on file — “Now we’re paying for four couples massages, enough for eight people,” she says.

Robison says the charges couldn’t be reversed at the resort. The employees reportedly suggested they call customer service.

According to Robinson, she’s been disputing the charges for five months. She claims she tried to work it out with her credit card company but “Sandals lied and said the charges were for the cost of the stay” and not the over-charge for the massages.

Since being posted on May 11, the video received over 363,000 views and over 27,000 likes. The comments section rallied behind Robinson, with many people saying they canceled their stay at the resort and others urging Sandals to refund the creator.

“Thank you for posting because I was going to book with @Sandals Resorts. Not anymore,” one comment said. The creator responded, saying, “It ruined my whole experience bc all that time I spent relaxing is being reversed with all this damn stress.”

Another person said, “I was going to go next month, I just cancelled my booking. We are a party of 8, so we are all changing hotels.”

Update 11:22pm CT, May 15:  In a statement to the Daily Dot, a spokesperson from Sandals Resort said the following:

“Thank you for the opportunity to respond and correct the story Mrs. Robinson shared via TikTok, as she had already received a refund at the time of her posting. Customer service is the foundation of our resort experience, and we will always act in the best interest of our guests.
Following please find a timeline of the events:

We were surprised to see this addressed on social media as we already corrected the issue, but are confident the charges have been resolved, despite her post.”