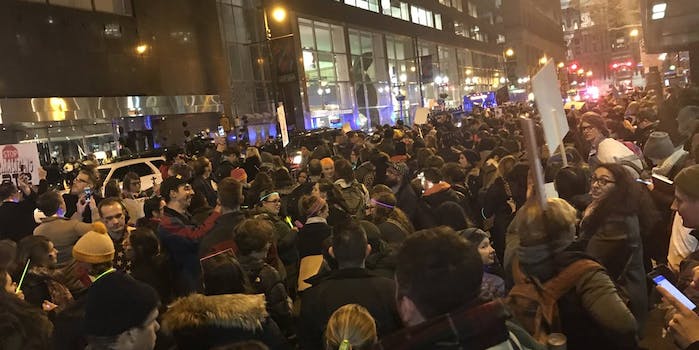 Protesters across the country are resisting Trump’s anti-immigrant, anti-Muslim orders

Mayors and marchers are speaking out against the president.

Donald Trump has made quick work of executive orders, mandating an immigration and refugee ban, the construction of a wall along America’s southern border (where there’s already a wall), and the construction of the Keystone XL and DAPL pipelines. He has also threatened to remove funding from sanctuary cities and counties who refuse to adhere to new immigration guidelines. But cities across America are fighting back.

Mayors of sanctuary cities like New York, Boston, and Chicago have promised to resist Trump’s orders. Boston Mayor Marty Walsh called them a “direct attack on Boston’s people, Boston’s strength, and Boston’s values,” and said if necessary they would use city hall as a shelter. New York Mayor Bill DeBlasio said the orders could threaten the city’s safety, making undocumented people afraid to speak to police, and said the city will sue if it’s stripped of funding. Seattle Mayor Ed Murray commented, “This city will not be bullied by this administration.”

Aside from politicians’ stances, there have been other shows of solidarity and resistance. Last night in New York, an emergency rally took place in support of Muslim and immigrant rights, organized by the Council on American-Islamic Relations (CAIR). On Jan. 27, a rally is being organized outside of bank offices in New Haven, Connecticut, demanding they cut funding to the DAPL. And yesterday and today in Philadelphia, protesters stormed the hotel where Trump is staying for a GOP retreat.

Big queer dance protest where Trump and the GOP are staying in Philly pic.twitter.com/Wmf5w9pQSJ

"No hate, no fear, immigrants are welcome here" chant at Anti-Trump protest in Philly tonight pic.twitter.com/o0yVRbxbRL

Around the country, protesters are planning a march on April 15—Tax Day—in response to Trump not releasing his tax returns. “President Trump has still not released his tax returns. That is unacceptable—and 74 percent of Americans agree,” write the march’s organizers on their website. So far, nearly 6,000 people have RSVP’d to the New York chapter of the march.

The resistance to Trump’s administration is not being confined to last weekend’s protests and women’s marches, and it’s not slowing down. Citizens are continuing to speak out—in big, little, clever, and everyday ways.