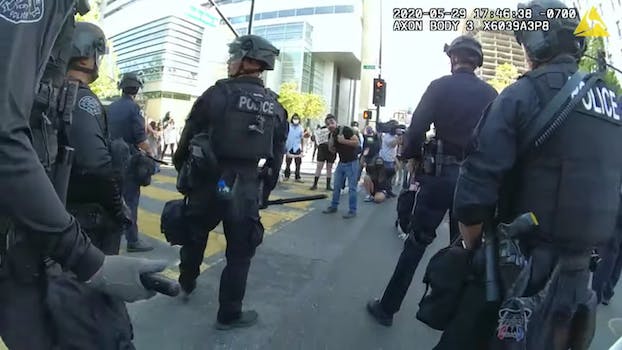 Another offer told a protester to 'shut up, b*tch.'

The San Jose Police Department in California on Friday released three videos of body camera footage that shows an officer using foul language after a protester allegedly threw a bottle at another officer.

“Let’s get these motherfuckers,” the officer shouted before hitting the man with a foam baton. Another officer yelled “shut up, bitch” to a woman protester shouting Black Lives Matter chants.

The footage was taken during George Floyd protests on May 29 and 31. Another video shows a police officer run over a man on foot with a motorcycle, which police said was an accident.

The footage also shows multiple other incidents of crude language and physical force.

Yahoo News reports that the footage’s release came after community pressure and concern about police conduct during protests.

In a statement accompanying the released footage, San Jose Police Chief Edgardo Garcia said the decision to release the videos came from a collaboration with the city manager and the mayor.

“We hope releasing these videos will provide the public more clarity into each of these incidents,” he stated. “Each video is only one piece of information used to fully understand a complex event. Some opinions and conclusions may be affected after watching certain videos; others will not.”