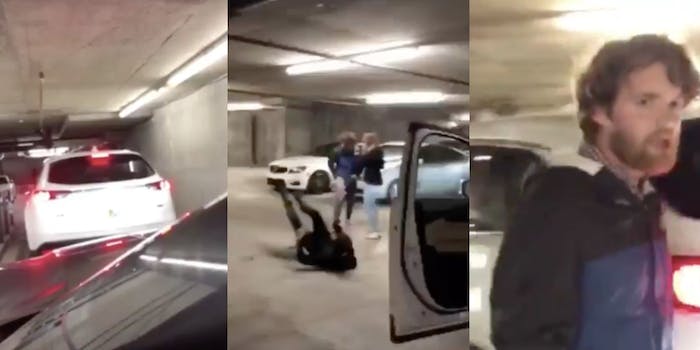 'I called the cops. So you have about five minutes to get out of here.'

A video showing a male “Karen” blocking a Latino man from entering the apartment complex that he lives in is going viral.

The video takes place in a parking garage in San Francisco. The video shows a man, identified as William Beasley, barring Michael Barajas from entering his own apartment complex and then assaulting a bystander who tried to intervene.

Barajas, the man recording the incident, told ABC 7 in the Bay Area that he was coming home from buying fruit on Tuesday evening. A white SUV then pulled up in front of him and stopped at the entrance of the garage. The position of the vehicle kept him from entering.

“His immediate reaction was ‘hey you f*cking criminal, you’re not coming in here.’” Barajas said.

Barajas said he suspects that Beasley profiled him when he saw he was a Latino man in black clothes and with tattoos.

In the first video, Beasley won’t enter into the garage because he thinks that Barajas will drive in after him without using a key.

“If you have a key card, then you can get in yourself,” Beasley said as he pokes his head out of the window.

Barajas said that he has a key and that he lives in the complex, but Beasley won’t move, making it impossible for Barajas to use his key. Then, Beasley said he’s calling the cops.

“You’re not coming in the f*cking garage,” Beasley can be heard saying in the video. “I called the cops. So you have about five minutes to get out of here.”

Barajas yells back, “That’s fine! Call the cops! What are you calling the cops about, Karen?”

Barajas is silent for a couple of seconds as he waits to see if anything changes. Then, Barajas begins to explain what’s happening as he continues to record.

“He’s literally blocking me from entering because he thinks I’m trying to break into the building even though I live here,” Barajas said. “This is so racist.”

The second video gets even more intense and appears to show Beasley turning violent and beating a man who comes to Barajas’ defense.

At the beginning of the second video, a man can be heard yelling, “Move! F*cking move!” It sounds like the bystander then hit Beasley’s car with his hand, but it’s not pictured in the video.

Beasley gets out of the vehicle and yells that security is coming and not to touch his car. Beasley then charges at the bystander, and Barajas runs to help.

After the incident, it was reported that Beasley was an employee of APEX Systems, which later released a statement on Twitter addressing the video.

“We have made the decision to terminate the employee, effective immediately,” the company wrote. “We will not tolerate violent or racist behavior of any kind at Apex Systems.”

Barajas told ABC 7 that the racist incident deeply upset him.

“I’ve always been from a really poor, poor immigrant family, so I think what happened just struck very hard for me,” he said. “I felt, for me, that I do not belong here.”