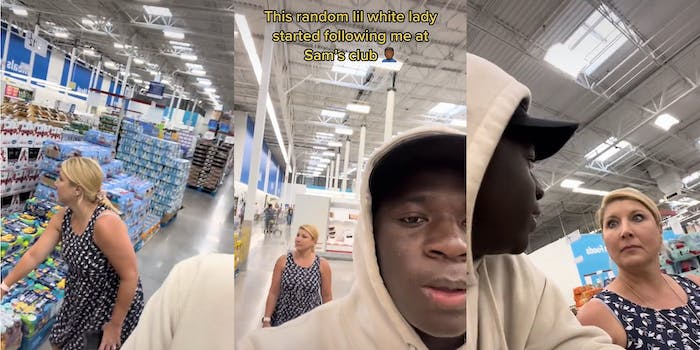 'Dude about to get his mom cancelled.'

A Black TikToker filmed a video showing a white woman following him around a Sam’s Club, but it turns out that the woman is his mom.

Wilson Guenther, who regularly posts videos with his family, posted a TikTok showing a white woman walking closely behind him in Sam’s Club on June 1. In the video, he says he doesn’t know who the woman is and that she asked him if he had a Sam’s Club membership. He also asks her why she is following him in the video.

“She needa chill fr [for real],” Guenther wrote in the video’s caption. “Who is this lady.”

On Tuesday, Guenther’s video had over 8.6 million views.

In Guenther’s other videos, he shows that the white woman is his mom.

Some commenters on Guenther’s viral video seemed to be in on the joke.

“Dude about to get his mom cancelled,” @unamusedfatguy commented.

Others didn’t seem to know it was a prank.

“NEVER DO THIS AGAIN I WAS WORRIED,” @minaminafever commented.

“Went to his profile to see if he posted any update about that woman,” @justintalladega wrote. “Found something slightly different.”

In an email to the Daily Dot, Guenther said his video was a “social experiment,” and that he assumed that when he posted the video, viewers wouldn’t know the woman was his mom.