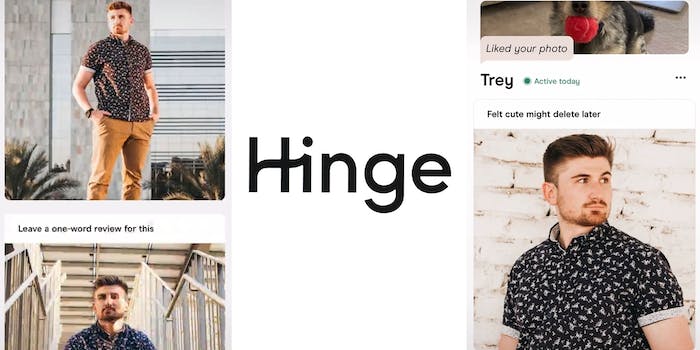 ‘My boy loves his shirt’: Woman flames man for wearing the same shirt in 4 different pictures on his Hinge profile, backfires

'Mans had a photoshoot.'

A TikToker’s video roasting someone on dating app Hinge for wearing the same shirt in all of their photos has viewers criticizing the poster for putting the other person on blast.

The video was posted to TikTok by @tcoolzz, who counted the number of photos featuring the same shirt. “Trey, if you see this I’m super sorry, but we got not one, not two, not three, not four, but five photos in the same fucking shirt,” she says in a voice-over on the video.

In her own comment section, @tcoolzz lets her viewers know that there was no ill intent behind her video. “There was no mean intentions behind this video, I simply just found it to be funny!” she wrote. “Trey rocks the hell out of his shirt. All love.”

Some commenters didn’t feel the same way——or joked about it.

“That’s his favourite shirt, what you have against my bro?” one commenter wrote. “He owns [two] companies and volunteers as a fireman on the weekends.”

“What if my guy just owns 5 of the same shirt?” another commenter wrote. “Main character energy right there.”

“That’s because he actually donated all his clothes to Ukraine and I helped him that day,” a commenter wrote.

Others were more serious about letting the poster know that they thought this was a bad take.

“If I had a dating profile and some girl blasted it on TikTok to make fun of me I’d be pretty fucking sad,” one commenter wrote.

“There are much better ways to get imaginary internet points versus shitting on people publicly,” another commenter wrote. “It just makes you look like a sad person.”

“I mean, the fact you noticed and even made a video on it says a lot about what you value,” a commenter wrote. “Treys better off (without) you.”

The Daily Dot has reached out to @tcoolzz and Trey via Instagram DM regarding the video.