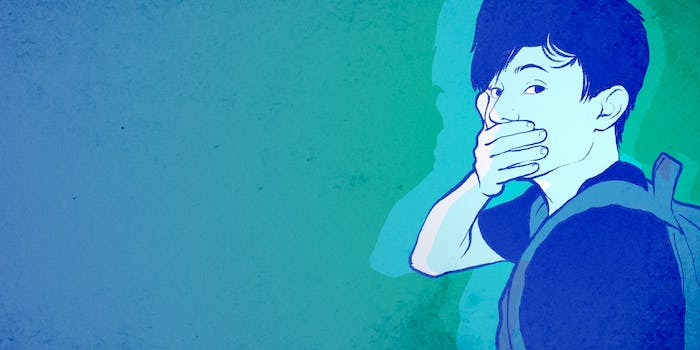 Fans have showered Collins with love and support.

Sam Collins is one of those boys on YouTube who has tons of crushed-out female fans.

His videos about high school, flirting, stalking his followers online, and various ephemera have grown in popularity since the 20-year-old first started posting videos to YouTube and Vine in 2012. He’s cute, with scruffy dark hair and a range of puppy-dog facial expressions that could rival Justin Bieber. It’s no wonder that the majority of the comments he receives are from teen girls who post variations of “I love you.”

However, on Sunday, it was Sam’s turn to share something intimate with his fans: He’s transgender.

“I’m Ftm transgender,” said Collins in a coming-out video posted to his YouTube profile. “Which means female to male. Which means that I used to be female, I used to live as a female. And I know this is going to be hard for some people to understand.”

Collins transitioned and began living as a guy four years ago, at age 16, but waited until now to come out.

“I was scared in the beginning, I didn’t accept myself…but this year, it’s changed so much,” Collins told the Daily Dot via email on Monday. “I saw trans people like Caitlyn Jenner come out publicly, and it made me feel good about myself. I then saw more individuals on the internet be confident about being transgender, which led me to want to come out even more.”

Collins explained in the video that when he transitioned into Sam, “I matched my body with my brain. I got my hair cut and all that stuff and changed my name.”

He went on to describe how he lived as a tomboy until about age 8, then continued to feel more and more male and “wrong” until reaching an apex of gender crisis at age 15. That’s when Collins felt suicidal. “I hated myself,” he said. The experience he describes in the video matches that of many transgender people—especially youth, who at young ages often don’t understand why their gender identity is so different from that of other people.

After transitioning and starting to live as a boy, everything slowly changed. He quietly came out to his male best friend (who was “shocked”) and his now-girlfriend. “My entire family accepts me,” he said, but some people have been less accepting—and he recommends that those people be “cut out of your life.”

In the video, Collins also spoke directly to female fans who find him attractive, clarifying that it doesn’t make you a lesbian to find a trans guy hot: “No, it doesn’t. It means that you are straight. You like a guy. Clearly, if you look at me, I’m a guy.”

His girlfriend, in fact, was originally a fan.

“She was going through some tough times, so I decided to help her out through messaging, and eventually we became close,” Collins told the Daily Dot. “We see each other every so often because I travel so much. She makes me so happy.”

In the hours after his coming-out video was shared over a 1,400 times on Twitter, Collins tweeted that the hundreds of supportive and loving messages flooding in were “overwhelming.”

this support is overwhelming I didn't expect this

“I’ve only had minimal negative comments,” Collins told the Daily Dot on Monday, “probably about 10 out of my thousands of positive ones. I just brush them off. They honestly don’t bother me at all.”

Fellow LGBT YouTubers Gigi Gorgeous and Connor Franta were thanked in the video. Collins referred to both as inspirations, for coming out and staying out—making it a little easier for one young trans guy to tell the world his story.

“I just want to help people of my community,” Collins said. “And I hope that I can do so with the courage I had to post my video.”