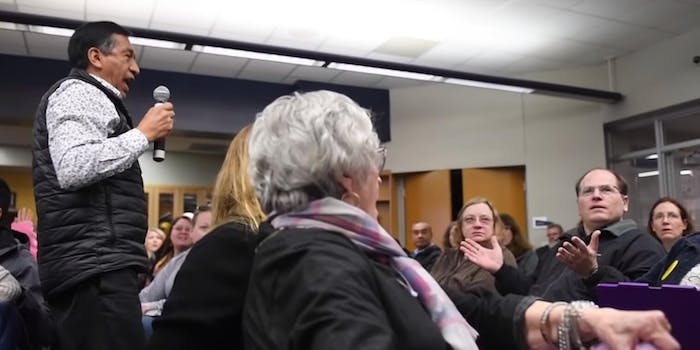 Man interrupts ‘inclusion’ meeting for parents: ‘Why didn’t you stay in Mexico?’

The meeting was supposed to address a racist incident at school.

A parent at a Michigan school was recounting the racism his son faced during a community meeting held specifically to address racism in the school… when a man from the crowd interrupted him to ask, “Why didn’t you stay in Mexico?”

It took place at a community meeting for parents on Monday in Saline, Michigan. Footage of the incident has resulted in a national dustup.

The moment—and following exchange—was captured in a video and shared on YouTube by MLive on Monday, and has since garnered almost a million views. On Thursday, it was a top Google News trend as the incident went viral.

The video starts with a father, identified by the Associated Press as Adrian Iraola, remembering an incident where he faced his son, who was being bullied in school and being called racist things such as “enchilada” and “taco.” Iraola’s son went on to earn a master’s degree from Johns Hopkins University.

“I remember when I went to his bedroom to say ‘goodnight’ and he was crying,” Iraola says recalling incidents from his son’s school days, standing in a sea of parents. “Because of the abuse he was enduring in this school system.”

“Then why didn’t you stay in Mexico,” says a voice from the crowd, eliciting loud gasps and horrified looks from other parents in the meeting. The man has since been identified as Tom Burtell.

“You need to leave,” a woman is heard saying from behind the camera, while others express their horror and turn to him.

Burtell, who is white, then shrugs and looks on, seemingly confused about why this concerned those present at the meeting.

Meanwhile, the other parents ask Burtell to leave, while some others look on.

Another man, who is not seen in the video, says, “This is a platform for discussion.”

To which Burtell says, “That’s right… I got respect for you man.”

When he is handed the mic by Iraola to “explain” himself, however, Burtell refuses to accept it and asks Iraola to “go ahead.”

The crowd cheers his response and Burtell, still seated, yells, “But you’re complaining about being here.”

He keeps on saying that over the cheers of the crowd, until some others scream, “It’s not your turn!” from behind the camera.

When a woman from around Burtell approaches him, likely to ask him to take a step back, he shushes her with his hand and says dismissively, “OK, have a seat.”

The community meeting was taking place in response to racist incidents at the school last month, as experienced by the students. The administration, after an investigation, concluded the incidents were racist, according to the Associated Press.

Anti-Black racist remarks were posted in a Snapchat group among students of Saline High School, and when Black students joined the group, it was re-named “Racist” with two gorilla emoji.

Other non-Black students in the group wrote messages such as “WHITE POWER” and “THE SOUTH WILL RISE AGAIN” in the group.

Burtell’s son Mathew Burtell, who is a 2014 alumnus of the school, told MLive on Tuesday that the exchange upset him.

“We can’t stand idly by—as children, as brothers and sisters, as friends and as people interacting with each other in daily life—when someone says or does anything racist,” he said. “It’s all of our responsibilities and it shouldn’t have to get to this.”