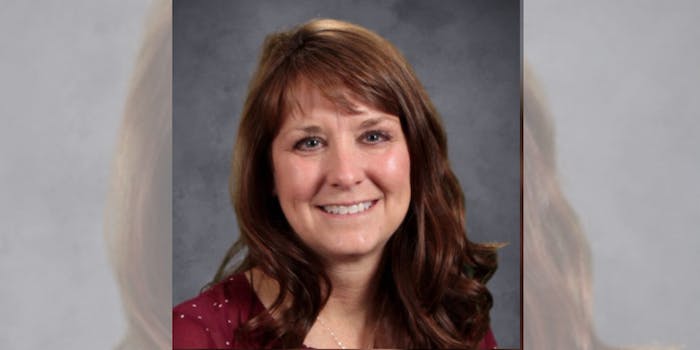 'He was a criminal.'

An elementary school principal in Pickerington, Ohio will serve a 10-day suspension without pay following inflammatory posts she made earlier this year on Facebook about Black Lives Matter, George Floyd, and COVID-19, according to reporting by Insider.

Ruth Stickel, principal of Fairfield Elementary School in Columbus, Ohio, commented “he was a criminal” on a news article post about a memorial scholarship named after George Floyd, a Black man who was killed by a Minneapolis police officer kneeling on his neck in late May.

According to an October report by the Columbus Dispatch, Stickel also shared an image on Facebook calling the Black Lives Matter movement a “leftist lie,” though a settlement signed by the school district on Dec. 7 found no evidence of Stickel making such a post.

Additionally, Stickel made controversial comments about the coronavirus pandemic, in which she appeared to endorse a conspiracy theory that the COVID-19 virus was intentionally created in a lab in Wuhan, China, where the COVID-19 was first discovered in late 2019.

Stickel also wrote that Dr. Anthony Fauci, director of the National Institute of Allergy and Infectious Diseases, should face murder charges, claiming “his little [President Barack] Obama and Fauci lab in Wuhan is cooking something up.”

In addition to her comments about BLM and COVID-19, Stickel also targeted Vice President-elect Kamala Harris, stating that Harris was going to turn the U.S. into a “communist nation,” according to Insider.

Further violations, the letter warned, would result in further discipline, including possible termination, according to the Columbus Dispatch.

According to a report by ThisWeek Community News, Stickel agreed to delete the posts and serve a suspension over the course of 10 weeks, with suspension for four days in January, four days in February, and two days in March.

Stickel is not the only principal in the school district with controversial social media posts. Damicka Bates, a Black assistant principal, was denied promotion to principal of Pickerington Elementary School in late July after posting a photo of her daughter posing near anti-police graffiti.

Following Stickel’s settlement with the district, Bates’ denial of promotion raised concern among community members who argued that the social media policy and disciplinary action was being applied equally.

According to Pickerington’s Board of Education, the district’s social media policy states that they can regulate the use of social media by employees, including on personal accounts, under certain circumstances.

Charles E. Newman, senior pastor at Antioch Baptist Church of Columbus and a Pickerington North High School graduate, told the Columbus Dispatch that the district has ignored racially biased behavior directed toward administrators, teachers, staff, and students of color by those in leadership positions.

“When we looked at both situations, the discipline was unequal,” Newman said.

Bates apologized for the post, saying the photo appeared to be cropped in a preview before she posted it to Instagram and Facebook, so she didn’t see the derogatory statement.

On Dec. 18, the district posted on its website that it had conducted separate investigations of both incidents and found both administrators violated policies governing acceptable use of social media by employees, according to ThisWeek Community News.

“As a district that values diversity, we proudly represent over 10,000 students, their families and other stakeholders,” the post states. “In these two cases, unacceptable social-media use caused the district to take a stance on issues that are seemingly divisive; however, justice demands that each case is considered on its own merits.