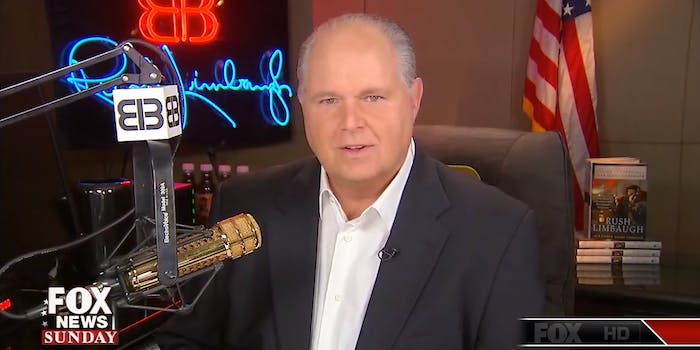 Rush Limbaugh understands consent—but not how rape is criminal

'Consent is the magic key to the left.'

Rush Limbaugh has never had the most nuanced takes when it comes to women, sexual assault, lesbians, abortion, Feminazis, you name it. This is a man who once said it was cool to teach your sons “no” means “yes” when it comes to consent.

So on Wednesday it came as a surprise when the conservative talk show host actually gave an accurate definition of consent—unintentionally, of course. “You can do anything, the left will promote and understand and tolerate anything, as long as there is one element,” Limbaugh began in regards to his opinion on the Trump “pussy” tape. “Do you know what it is? Consent. If there is consent on both or all three or all four—however many are involved in the sex act—it’s perfectly fine, whatever it is.”

Correct! If you have consent, it means you can have sex with a person or multiple persons and it’s not rape! He goes on:

“But if the left ever senses and smells that there’s no consent in part of the equation, then here come the rape police. But consent is the magic key to the left.”

Wait, this is true, too! If you don’t have consent, you should go to the police and tell them you’ve been raped. It would be great if there were actual “rape police,” though, who magically appeared (preferably before) you’ve been assaulted to knock the shit of some guy’s pussy-grabbing hand or unwanted boner. This is not the case, however. We just have men like Limbaugh and hashtags like #NextFakeTrumpVictim who are trying to silence victims, of which there are at least one a minute in the U.S.

Someone feel free to make #LetsStartAMotherfuckingVigilanteRapePolice happen, instead.