The hashtag accuses women of lying about Trump for attention.

So far, six women have come forward saying Donald Trump has sexually abused or harassed them this week, with the expectation that there is more to come. However, in the long and hearty tradition of not believing women, #NextFakeTrumpVictim has reared its ugly head, in which Trump supporters cry that it’s all a vast conspiracy.

Successful business man has no complaints about sexual harassment until he runs against the Clintons who do… ironic?#NextFakeTrumpVictim

Who will be outed by @wikileaks tomorrow, & who will be the #NextFakeTrumpVictim to distract from tomorrow's proof of disgusting corruption?

The hashtag naturally appears to have started on 4chan, in which an anonymous user who claimed to have inside knowledge of the Clinton campaign requested it start on Monday. “I pray you guys get this done by all measures. You can change the narrative,” they write. However, the hashtag didn’t gain steam until Wednesday night, after the New York Times published a piece in which two women accused Trump of touching them inappropriately. 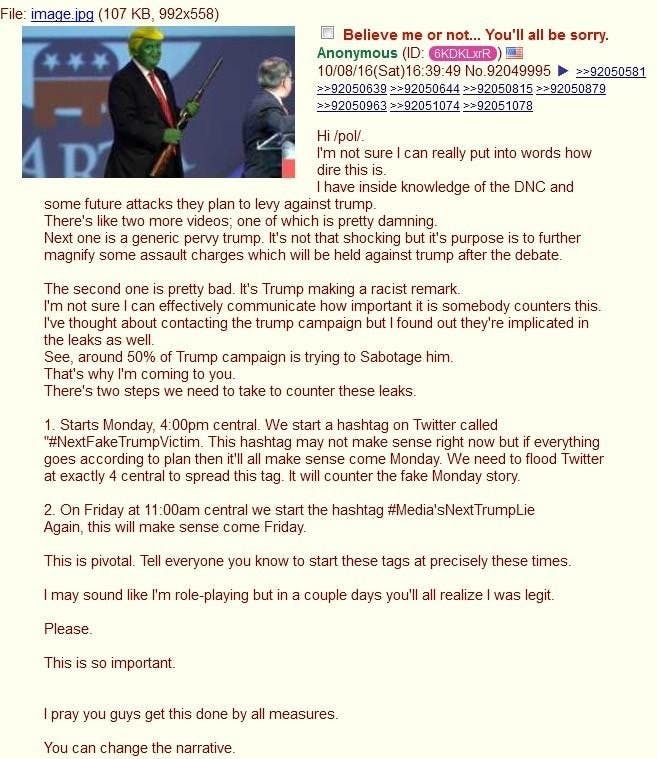 Many women who’ve experienced sexual assault are saying campaigns like this are exactly why so many rape victims don’t feel comfortable coming forward. They see the risks of reporting—the scrutiny, the abuse by police, the hundreds of people saying she’s just doing it for attention or, weirder, money—and decide it’s not worth it. That it won’t change anything. And it’s this same culture that convinces victims the way they’re treated is to be expected.

So, sure, Trump’s alleged victims are doing it for the attention. You know, all that positive attention rape victims are subjected to when they come forward, like being questioned about what they were wearing, how much they were drinking, and facing long legal battles that will most likely not result in jail time for their abusers. Women just dream of that.