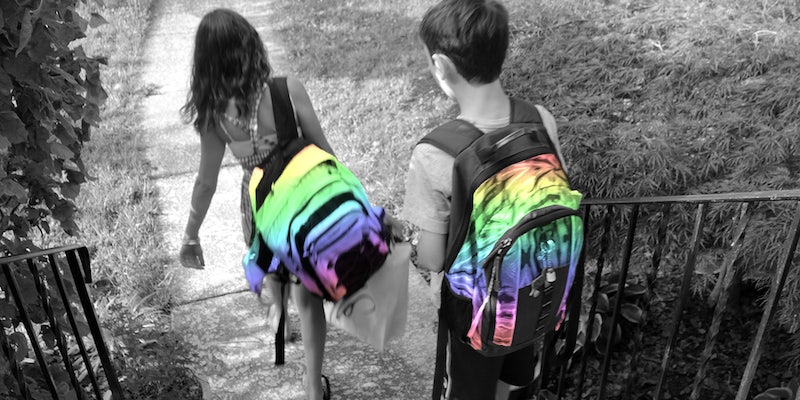 Hollywood’s teens are coming out over social media

How old were you when you came out of the closet?

There’s no rhyme or reason to coming out as queer, no golden age at which all homos are suddenly visited by the gay stork who bestows a sexual orientation upon them. But as the culture becomes more accepting and LGBT rights increase at the policy level, it does seem like kids are coming out pretty much at birth. And now, they’re using social media to announce their identities.

Disney’s Girl Meets World actress Rowan Blanchard, who is just 14 years old, came out as queer via Twitter on Saturday. Just a week before, 17-year-old The Hunger Games actress Amandla Stenberg came out as bisexual on Snapchat.

Blanchard came out in a response tweet after a fan tweeted “BisexualRileyMatthews2k16,” in reference to the character Blanchard plays on Girl Meets World.

@coffeeshoprowan would really be here for this! if not Riley- its vvv important to me, being queer, that there is representation on our show

The tweet got so many strong reactions (most positive, some not) that Blanchard followed up with a clarification of what “queer” means to her.

While Blanchard and Stenberg have used their platforms to come out, some teen stars were born because they were queer.

In December, the Daily Dot named Brendan Jordan one of its annual 20 Under 20. The 16-year-old gender fluid makeup queen may have half a million Instagram followers now, but Jordan was practically still a baby when a video of him boldly vogueing in the background of a random local newscast went insanely viral.

Jordan didn’t need to be famous to come out—he was simply the gayest little thing the world had ever seen, and such innate fabulousness must be recognized and worshipped for its beauty. A star was born.

In the same 20 Under 20 list, the Daily Dot featured transgender teen Jazz Jennings. But Jazz isn’t just the biggest trans teen celebrity in history, she also came out as pansexual at the tender age of 14. In a 2014 video posted to her YouTube channel, Jennings answered fan questions. When someone asked whether she was attracted to boys, Jennings gave the kind of open-minded response that’s becoming typical of queer youth.

“I will say that I’m pansexual,” said Jennings, “And I mostly like people for their personality. I don’t care if they’re gay, bi, trans, whatever they are.”

The increasingly young ages at which teens are coming out as LGBT likely doesn’t reflect an increase in general queerness. Rather, it’s probably just safer to come out in a world that’s more accepting and supportive of LGBT kids and adults alike.

Photo via woodleywonderworks / Flickr (CC by 2.0) | Remix by Max Fleishman