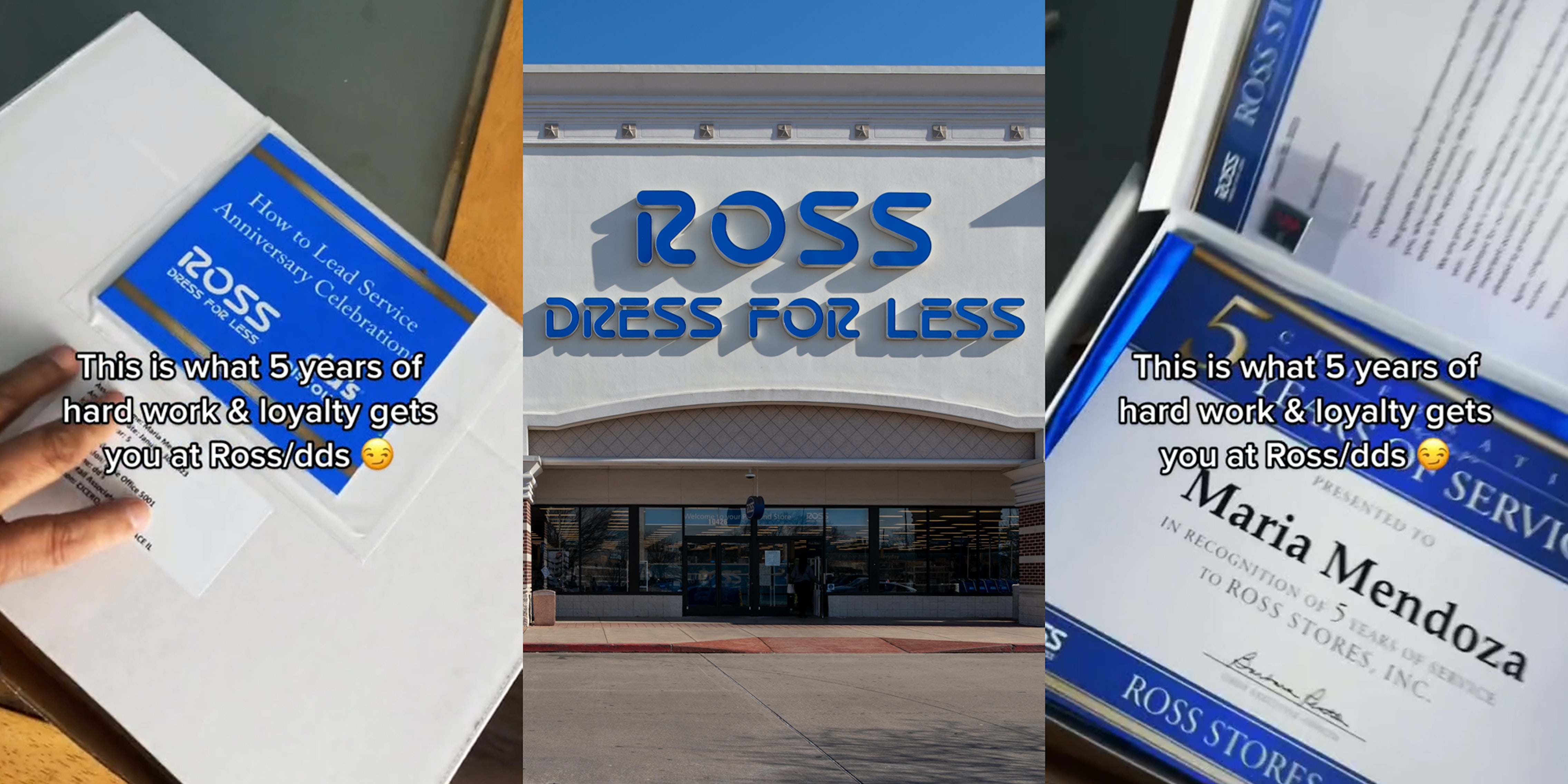 ‘This is what 5 years of hard work and loyalty gets you’: Ross employee receives paper award for 5 years of service

Bad workplace gifts aren’t uncommon, and if one scrolls around the internet enough, one’ll find plenty of examples of less-than-stellar thank-yous folks have received from their bosses.

Since the onset of the COVID-19 pandemic and a labor shortage that changed the landscape of employment, hiring, and worker salaries, a number of social media posts have been cropping up online where folks have expressed their dissatisfaction with the treatment they’ve been receiving in their current roles.

A recent TikTok posted by user Maria Mendoza (@stars0nmars) sparked a conversation about companies’ perceived worth, or lack thereof, of their employees. In the video, she highlights what she received from Ross Dress for Less after working for the clothing retailer for five years and helping to successfully open a new location that remained in business.

In a caption for the post, Mendoza intones that she regrets putting so much effort into her job at Ross after seeing the appreciation gift the company gave her. “Hmm, I really didn’t expect much from #ross #ddsdiscount but I’ve learned a big lesson from my #coworkers & that’s to never put your 100% into a #job #cheapskates #lol #award #retailjobs,” she wrote.

“So I guess this is my five years with Ross and I guess they gave me a package of something so I’m gonna open it up and see what’s inside,” Mendoza says in the video.

The clip then cuts to the TikToker opening a box containing a placard commemorating her five years of service with the company that reads “Service Award.”

She goes on to say, “I guess it’s some kind of award. Yeah, that’s exactly what it is. It’s an award I guess. Paper cardboard, basically just stating recognition of five years of service I guess for opening that store so…yeah. I think that’s it. Yeah, just an award.”

The Daily Dot has reached out to Maria via TikTok comment and Ross Dress for Less via email for further information.

Throngs of TikTokers expressed their dismay at the five-year appreciation gift. One commenter simply wrote, “what a joke!” Maria responded, “Young people taught me a lot. They taught me to work smart not hard. I’m thankful for that.”

Others highlighted that the packaging and production of the service award could’ve probably been better spent on a gift card or other type of more useful perk that employees would rather receive.

There were some viewers who discussed the underwhelming gifts they received from their companies for their employee loyalty.

“At Wells Fargo when I used to work there we also just got a certificate even with all that money laying around.. lol,” one user wrote.

“Yea my dad got something similar for 20 years at the company he’s works at it’s crazy,” another added.

“Dollar tree gave me a watch for my 5 years,” a third claimed.

Another TikToker highlighted that the company they work for actually offered a gift that they valued. “I work for an optical lab and for my 2 yr milestone they gave me 500 towards any brand name frames and the lenses/add ons are free,” they said.

According to Indeed, the average hourly rates for Ross Dress for Less employees range from $12.89 per hour to $19.89 depending on a worker’s role.