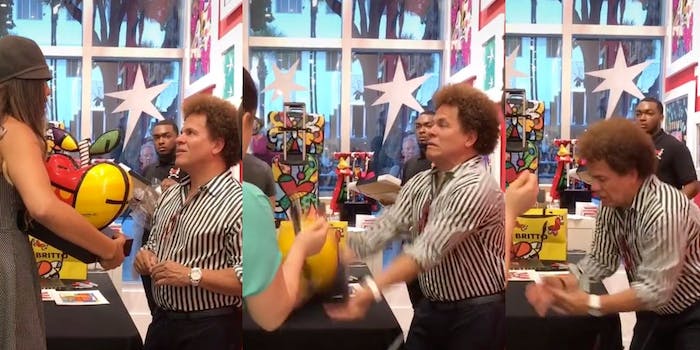 The incident took place at the Brazilian artist's meet-and-greet.

In a video posted by TikTok user @fayepindell19, who goes by Faye, the woman is seen holding the artwork, identified by Globo as a “the Big Apple porcelain piece,” while yelling at Britto.

Britto looks at the woman and fidgets his fingers. The woman then lifts the art and drops it on the ground. Britto reflexively tries to catch it, but it smashes on the ground.

“Usually at the end of each month, [Britto] will host a meet-and-greet for the people that bought his artwork,” Faye says in an explainer video.

The woman reportedly manages a restaurant where Britto and his friends recently dined. According to Faye’s explainer, Britto was “disrespectful and rude to the staff.”

After the workers reported this to the manager, she decided to bring her own porcelain artwork by Britto that she then smashed.

“Never go to my restaurant or offend my team, but never,” she says to him, according to a translated version of the article Globo. “I respected you.”

Britto “felt embarrassed,” Faye says. “He was saying he didn’t treat the workers with disrespect.”

According to Globo, an original piece similar to the porcelain piece in the video is priced at $4,800, and a smaller version is priced at $360.

Faye shared the video on Thursday, but it’s unclear when the incident took place. On Britto’s Instagram page, there was no mention of the incident as of Friday afternoon.