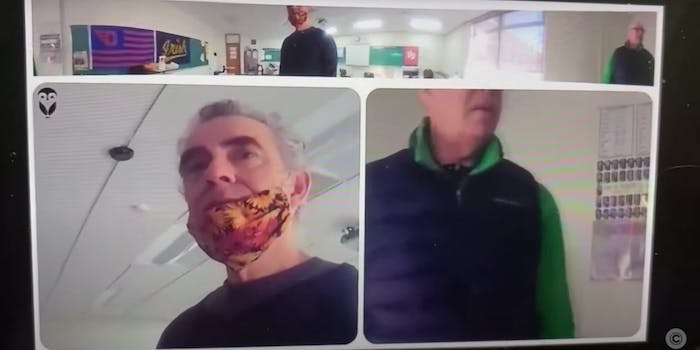 ‘I’m not above being a pervert’: Teachers caught on camera discussing taking explicit photo of female student

Staff members discuss a teacher who allegedly took a picture of the female student's crotch without her knowledge in class.

A group of teachers in Ohio are on administrative leave after being caught making inappropriate comments about a female student, according to Cleveland 19 News.

Footage of the conversation shows staff members from Rocky River High School discussing a teacher who had allegedly taken a picture of the female student’s crotch without her knowledge in class.

Released by the Rocky River Police Department on Friday, the video shows one staff member claiming that the teacher had informed him about the explicit photo.

Another staff member responded by stating that although he is “not above being a pervert,” he himself would draw the line at photographing a student.

The first staff member went on to decry the alleged photo as well but stated that the female student in question was “put together.”

“I mean, you know. I mean, I had her in class,” the staff member says. “We had conversations where he said, ‘Uh, she’s smoking hot. I think she’s the best in the school.’ I said, ‘Oh yeah, she’s… she’s not much of a student, nice enough girl, really freaking… yeah, put together.'”

In total, six staff members linked to the incident were reportedly placed on administrative leave.

It currently remains unclear whether a picture was actually taken of the student as described. Police on Thursday reportedly announced that no charges would be filed against any of the school’s staff members due to a lack of evidence.

“The investigation has concluded with the determination that there is insufficient evidence of criminal activity to charge anyone involved,” police said, per Fox 8. “No evidence of photos of students or inappropriate discussions about students were contained in the text message thread among the teachers.”

An attorney defending one of the teachers has since criticized the school district and the superintendent for allegedly waiting six hours before alerting police.

The Rocky River School District released a video statement defending its response to the issue. Questions still remain over whether the investigation by police was thorough enough to determine that no such picture had actually been taken.

The Daily Dot has reached out to Rocky River High School and the Rocky River Police Department.